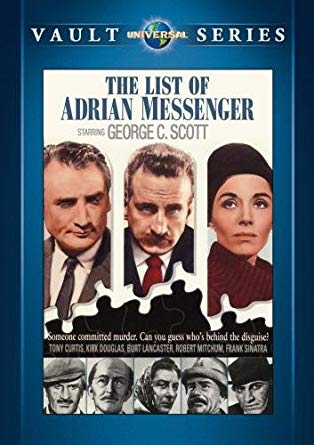 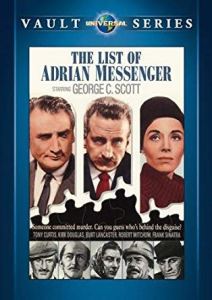 “There’s nary a conspiracy. And if I’m right about this, it’s a far older sin than politics.” – Adrian Messenger

Brief Synopsis –A former Army intelligence officer is sent on a quest to find out why men on a seemingly random list keep turning up dead.

My Take on it – This is a film that I came across when perusing a list of films directed by John Huston.

The title intrigued me, so I decided to see what it was all about.

This is a great mystery story that takes numerous genres and puts them all together in order to try and do something quite unique.

The story itself moves along at a great pace as we slowly begin to learn about things along with the characters themselves.

They do a wonderful job having the plot keep changing directions based on both what happens in the present to these characters and based on the information gathered about the past.

George C. Scott does a great job with the lead role and is helped along by the superb supporting cast who are quite mysterious in what they do.

The story gets more intense and thrilling as it edges towards its climax which helps make this even more enjoyable.

Bottom Line – Great mystery that is able to meld together numerous genres at the same time, The story moves at a great pace and allows us to slowly gather information along with the main character.  Love the way that the story keeps changing directions as things move along based on what happens in the present and also based on the information about the past. Scott is superb in the lead role and the mysterious supporting cast of characters also help to enhance this story as it gets closer and closer to the climax of it all. Recommended!

MovieRob’s Favorite Trivia – In an article for Video Watchdog magazine, actor Jan Merlin reports playing several of the star cameos in the movie, primarily Kirk Douglas when he is disguised in his various make-up. According to Merlin, Tony Curtis, Frank Sinatra (doubled by actor Dave Willock), and Burt Lancaster never appeared in the film proper and only shot close-ups for an epilogue peeling off their heavy make-up. Merlin used his experiences as the basis of a thinly-veiled novel about the filming of the movie titled ‘Shooting Montezuma’. (From IMDB)