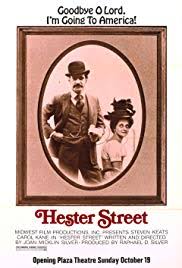 “Gitl, stop being a greenhorn. In America, anyone can dress like that!” – Jake

Brief Synopsis – A young Jewish immigrant couple try to find their place in America where the world is very different from the way they were brought up in Eastern Europe.

My Take on it – This is yet another film that I knew nothing about before encountering it during my quest to try and watch all films that have garnered Oscar nominations for its actors.

The premise of this film is great and in some respects was very reminiscent of the ideas brought forth in Fiddler on the Roof (1971) about trying to find the right balance between tradition and faith along with changes and advancements of the modern world.

The story is told really well and flows so smoothly as it allows us to get to know and understand these characters.

The tone of the story is perfect since it allows the viewer to see the various effects of assimilation and integration among immigrants to America at the end of the 1800’s.

This helps make the story so much more interesting and emotional in all that it tries to say.

The story itself moves at a very deliberate slow pace yet still remains enjoyable since this gives the characters time to try and deal with their conflicting emotions about trying to fit in with a society that is so foreign and strange to them.

Some integrate more easily than others and that in itself causes numerous conflicts along the way.

Carol Kane was deservingly nominated for an Oscar for Best Actress for her work in this film as a woman trying to find the right path for her family in the ever changing world.

With this role, she is able to show her range as an actress since the character has a very large arc that gives her much room to ponder things going on around her and this helps make the story even more profound to watch as it unfolds.

Some of the religious rituals performed in this film are done exceptional and may seem strange for those unfamiliar yet for those of us who are familiar, it makes the story even more realistic and poignant in all that it does.

Bottom Line – Great premise that works really well because of the way that the story flows so well. They find the right tone to show the effect of assimilation and integration of immigrants to America around the turn of the Century and it helps make the story so much more enjoyable to watch. The story unfolds in a slow deliberate pace yet finds a way to stay interesting as we watch the way that these characters try and find there place in a world that is so foreign to them.  Kane was deservingly nominated for an Oscar for Best Actress for her work in this film which allows her to show her acting range since her character arc is so profound throughout. Recommended!

MovieRob’s Favorite Trivia – This low-budget film cost only US $400,000 to make but grossed around US $5 million in the USA alone. (From IMDB)