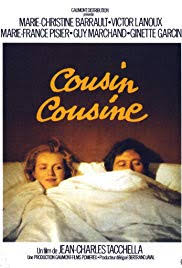 “It’s a shame. People should look for adventure, if only for an hour every so often.” – Ludovic

Brief Synopsis – Two cousins by marriage meet at a family occasion and begin a platonic relationship that helps them both cope with their spouses frequent disappearances.

My Take on it – This is a film that I never heard of before coming across it during my quest to watch all films that have received Oscar nominations for it’s performances.

The premise is quite good and is enhanced by the fact that the two leads played by Marie-Christie Barrault and Victor Lanoux have such great chemistry together that we can believe the kind of friendship that their characters have throughout the story.

They are each trying to find someone who understands the situation that they each find themselves in and that helps their friendship blossom as the story unfolds.

The pacing of their friendship moves along quite well and it make sit even more plausible to believe how connected their characters become as things move along.

Loved the way that they throw in some funny situations along the way that help bring these characters closer until they both reach a point where they begin to question themselves as to what kind of friendship they wish to have with one another.

Barrault was deservingly nominated for an Oscar for Best Actress for her work in this film.

Bottom Line – Interesting idea that work due to the chemistry between the two leads who make us believe the friendship that blossoms between them as they both try to find someone who understands them.  The friendship between them moves along at a nice and realistic pace and it’s completely understandable how they become so connected over time. The film does a nice job depicting various humorous situations that occur which help make the character become closer and closer to a point where they both wonder what kind of friendship they truly want with one another. Barrault was deservingly nominated for an Oscar for Best Actress for her work in this film. Recommended!

MovieRob’s Favorite Trivia – Was a surprise box office hit in America, becoming the most popular French film in the US since A Man and a Woman. (From IMDB)