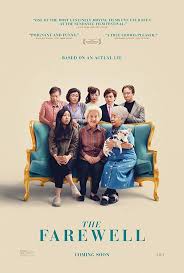 Brief Synopsis – Suspecting that the elderly matriarch of the family is dying, they plan a wedding in order to bring the whole family back together for the last time.

My Take on it – This is a film that I wasn’t sure if I wanted to watch it when I came across it.

I’m not the biggest fan of Foreign Language films and do my bets to try and avoid them, but lately I have been trying to change my viewpoint on these kind of films, so I decided to give it a try especially given the fact that I’d heard some great things about this movie.

The film is quite fun largely due to the fact that the characters all seem quite realistic  and down to Earth in the way that they are portrayed.

The additional fact that the story is based on real events also enhances the way one looks at the story because it comes across as seeming so real and is quite interesting to watch unfold.

The writer/director of the film, Lucy Wang finds a way to tell this story in such a genuine fashion and that is done by the addition of so many small details that make the story even more endearing and familiar.

This film is a lot of fun for the viewer and that also has to do with the fact that the strong familial bonds that these characters have are very relatable to many people and they can see themselves and their families going through similar circumstances.

Bottom Line – Such a fun film that works because the characters are so down to Earth and realistic. The fact that this film is based on a true story also helps make it that much more interesting to watch unfold. The writer/director is able to make the story feel so genuine by lots of little details which enhance the viewing of this film.  LOt of fun to watch because this family can be any family that has strong bonds like these which makes things so relatable for the viewer. Recommended!

MovieRob’s Favorite Trivia – The premise of this movie is based on a true story from Lulu Wang’s real life: as the family in the film does, her family really did lie to Wang’s grandmother about the grandmother’s terminal cancer diagnosis in an attempt to prolong her life. The element of the story in which they use a family wedding as an excuse for everyone to come and visit the grandmother because she is dying was also based in fact. Wang had a great deal of trouble finding financiers to back the filming. American producers objected to the all-Asian cast and insisted that she needed to add prominent white characters. Chinese financiers thought the story was too American, and they also insisted on adding white characters. So in another attempt to draw attention to the project, Wang adapted the story into a segment of the April 22, 2016, episode of the public radio storytelling program “This American Life,” which did result in Chris Weitz coming on as a producer and procuring other financing. (From IMDB)