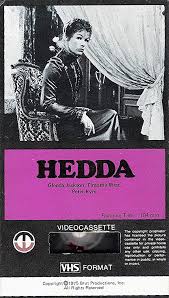 “Don’t you understand what people will say about it?” – Hedda

Brief Synopsis – An aristocratic Norwegian woman tries to decide what to do when her former lover shows up and becomes an intellectual rival for her husband with whom she is no longer sure if there still remains love between them.

My Take on it – This is yet another film in the ever shortening list of films that I knew nothing about before coming across it on my quest to watch all films that have received Oscar nominations for the cast.

I wasn’t sure what to expect here and in reality, it was even worse than I had dreamed it would be.

This movie is an extremely boring and drawn out costume drama that weaves a very complex and sometimes disjointed story line.

The film tries much too hard to attempt to show how a woman living in that place and time could be torn about her future since she isn’t sure if she is content with what she has or if she wants more.

The cast is quite lean here and Glenda Jackson stands out in the lead role even if things aren’t always clearly understood.

She managed to get an Oscar nomination for her work in this film for Best Actress and it’s actually difficult to gauge whether she was deserving of such an accolade or not.

Nice seeing Patrick Stewart in a prominent role even if this was one of his very first appearances in a film.

Unfortunately tho, even he can’t help make this story any more interesting to watch and it still remains quite torturous to try and get through.

Bottom Line – Really boring costume drama that moves along at a snails pace up until the very end. The story tries too hard to deal with how women were treated in that time and place where the atmosphere around them keeps them from making more of themselves.  The cast is quite talented and Jackson was nominated for an Oscar for Best Actress for her work in this convoluted and slow moving drama. Great seeing Stewart in one of his earliest roles, but even he can’t make this story more interesting to watch.

MovieRob’s Favorite Trivia – Second theatrical movie of Sir Patrick Stewart (Ejlert Løvborg). This movie was released in December, and Hennessy (1975) was released in July. (From IMDB)