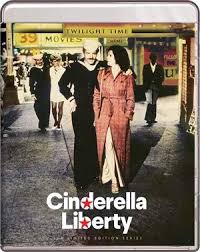 “Why is it everybody else gets chicken and I always get the feathers? ” – Maggie

Brief Synopsis – After his records are lost by the Navy, a young sailor on extended leave falls in love with a prostitute while also finding a way to bond with her ten year old son.

My Take on it – This is yet another movie that I knew nothing about or even had heard of before I came across it while going over the list of films that have received Oscar nominations for its cast members.

The concept isn’t unique, but they find ways to make it more intriguing and enjoyable to watch these characters develop a relationship.

The film is enhanced by the performances of the leads James Caan and Marsha Mason.

Mason was nominated for an Oscar for her work in this film as Best Actress, but had very strong competition that year that she unfortunately didn’t stand a chance of winning.

The story is paced really well and allows us to discover some great qualities that these characters have even though they are less sympathetic when we initially meet up with them.

The plot takes its time developing these characters in a very likeable and relatable way which helps make t even more intriguing to watch things unfold.

It’s quite simple to begin caring about them once we begin to learn so much about the various difficulties and obstacles that they must face.

Loved the way that each of these characters in their own way are seeking more out of life and one they get an opportunity to do something about it, they must try and find the strength and courage to break free of the constraints of such a lifestyle which becomes even more difficult once they understand that they must act in order to try and realize their dreams and wishes.

Bottom Line – Very intriguing concept that works due to the great performances by Caan and Mason. The story moves at a nice pace and allows us to find reasons to like these characters despite the way that they initially act. The story takes its time developing these characters to a point where we begin to care so much for them as we learn all of the hardships and obstacles that they each must deal with along the way. The way that they both are seeking more from life and love is great to see as they each try to break free from the various constraints of their lifestyles especially once they realize that they can have more if they try a bit harder. Mason was deservingly nominated for an Oscar for Best Actress for this very complex role. Recommended!

MovieRob’s Favorite Trivia – While walking the streets of Seattle in the movie, James Caan is approached by a panhandler who asks him for change. The man was an actual panhandler who didn’t see the cameras on the street, and mistook Caan for a real sailor. (From IMDB)