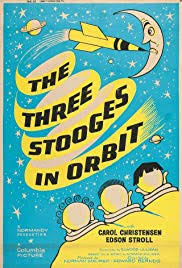 This is the final of 4 reviews celebrating Portuguese heritage in Film for The Luso World Cinema Blogathon being hosted by Beth of Spellbound By Movies and Letícia Magalhães of Crítica Retrô.

Thanks for letting me partake!

“What do you normally do when somebody mails you a bomb?” – Moe

Brief Synopsis –  While the Three Stooges are trying to get their variety show contract renewed, they come across a scientist trying to create a military vessel that can be used on land, sea, air and in outer space.

My Take on it – When trying to pick films to review for this blogathon, I decided that the best way to connect with the theme was to find actors with Portuguese heritage and watch some of their work.

While going through the list, I saw that Curly Joe (one of the Three Stooges) fit this category and therefore felt that it was the perfect opportunity to watch one of their films from late in their career.

I have seen Stooges shorts over the years, but this is the first time that I believe that I’ve seen a full length film.

The film is terrible when it comes to the plot and story yet is quite fun to watch due to the way that these characters always manage to utilize slapstick comedy so well.

The premise jumps around too much and fails to find any amount of plausibility in the story which also hurts things since it cant find a clear anchor for things.

Was great seeing the Stooges in action, but the story needs so much work to make it enjoyable.

The special effects and costumes for the alien aspects of the film are quite humorous to watch since they are outrageously terrible throughout.

Bottom Line – Fun yet completely outrageous Stooges film. The slapstick humor works quite well yet the fact that it’s easy to see the advanced age of the Stooges takes so much away from this film. The premise itself doesn’t find a way to even seem plausible and that also hurts the way that this story can be perceived.