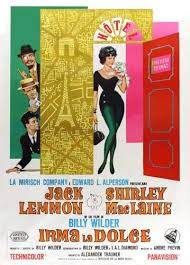 “Shows you the kind of world we live in. Love is illegal – but not hate. That you can do anywhere, anytime, to anybody. But if you want a little warmth, a little tenderness, a shoulder to cry on, a smile to cuddle up with, you have to hide in dark corners, like a criminal. Pfui. ” – Moustache

Brief Synopsis – After being fired for causing ripples in the local police department, a man inadvertently becomes the pimp for a popular prostitute in Paris. Trouble arises when he tries to think of a scheme to get her to stop working.

My Take on it – I have always been a fan of Billy Wilder’s kind of comedy and was quite intrigued to see what this one was all about when I came across it during my quest to watch all films that have had received Oscar nominations for its actors.

Jack Lemmon and Shirley MacLaine both did amazing jobs working with Wilder a few years earlier in The Apartment (1960) and I hoped that they would be able to one again create the same kind of magic and fun that they did in that movie.

They are once again great together but their chemistry is slightly less present here than it was in their previous endeavor together.

The story presented here is hilarious from start to finish because the comedy never lets up throughout.

Some peop, might view this film as a one joke movie but they are able to tell the same joke over and over from different angles which helps make things feel fresh and original regardless.

The film is filled with lots of little schemes by the characters that sometimes work and sometimes don’t but each of them comes across as being great.

The best character in this film is the one played by Lou Jacobi (Moustache) and he easily steals every scene that he appears in.

The film is bit too long at 2 and a half hours and it might have been even better if it had been slightly trimmed.

MacLaine was nominated for an Oscar for Best Actress for her work in this film.

Bottom Line – Really fun Wilder comedy that reunites him with Lemmon and MacLaine. The story itself is presented in a hilarious way that keeps things really funny from start to finish. The film is a bit too long at 2 and a half hours.  The film can be seen as a one joke story yet they find ways to keep it entertaining throughout.  The various schemes presented by the characters in the film are great and the best character is Jacobi as Mustache who steals every scene he is in. MacLaine received and Oscar nomination for Best Actress for her work in this film. Recommended!

MovieRob’s Favorite Trivia – The pimps’ union is called the “Mecs (Guys or Blokes) Paris Protective Association” (MPPA), which also stands for “Motion Picture Producers Association”, an organization which had given Director Billy Wilder some trouble. (From IMDB)