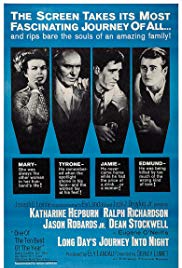 “This damned library of yours: Voltaire and Rousseau and Schopenhauer. And Ibsen… Atheists, fools and madmen! And your poet, this… “Baudelaire.” And Swinburne, and Oscar Wilde. Whitman and Poe… Whoremongers and degenerates! When I’ve got three good sets of Shakespeare there you can read… ” – James Tyrone

Brief Synopsis – A family congregates together following a long hot summer and end up baring their souls to one another about all of their grievances.

My Take on it – This is a great film based on a Eugene O’Neill play that works so well largely due to the exquisite dialogue.

I had never seen this before since I’m not the biggest fan of these kind of films, but since I came across it in my quest to watch all films that have garnered Oscar nominations in acting categories, I decided to give it a try.

The drama in this film is great to watch since it all takes place in a very enclosed area and everything depends so much on the dialogue.

The characters are developed really well via the way that they speak to others and how they are spoken to at the same time.

The cats is superb with Ralph Richardson, Katharine Hepburn, Jason Robards and Dean Stockwell all doing great things with these characters.

The film might be overly long and at nearly 3 hours, it can be a bit daunting at times, but it actually needs that time to get to the real “punch” which makes the journey worthwhile to stick around for.

Hepburn was very deservingly nominated for an Oscar for Best Actress for her work here.

Bottom Line – Great drama that all takes place in enclosed areas and is moved along by the exquisite dialogue. The run time is a bit too long even  though it takes that long to really get to the “punch” of things.  Amazing cast does a wonderful job with the situation presented here and helps develop these characters so well over the course of the film just via their verbal debates throughout. Hepburn was deservingly nominated for an Oscar for Best Actress for her work in this film. Recommended!

MovieRob’s Favorite Trivia – At one point during rehearsals, Director Sidney Lumet felt that Sir Ralph Richardson wasn’t really getting the proper measure of his character, James Tyrone. Lumet took Richardson aside and launched into a forty-five minute lecture about his character’s motivations. Richardson finally stopped him by saying “I see what you mean, dear boy, a little more cello, a little less flute”. Lumet confessed to being enormously impressed with this way of expressing it. (From IMDB)