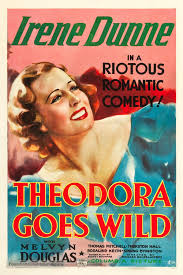 “It’s all perfectly clear to me. That adorable young thing is an unholy terror on wheels. There’s nothing in the world more deadly than innocence on the manhunt! ” – Ethel Stevenson

Brief Synopsis – A young socialite who writes a risque novel under a pseudonym tries to keep her identity a secret from her small town neighbors.

My Take on it – This is yet another movie that I never had heard of before coming across it during my quest to watch all films that have received Oscar nominations in the acting categories.

The premise of this film is actually quite intriguing but unfortunately, they don;t manage to make it as enjoyable as one might hope it could be.

Irene Dunne is a fine actress and does a nice job in the lead role even if she is far from being perfect in this performance.

She somehow was able to garner an Oscar nomination for Best Actress for her work here despite this.

The story is actually filled with some very risque themes but due to the way that they present things, it’s much harder to care about the themes that arise.

The way that they relate to the characters is done quite weakly and that also hurts things more than helping them.

The characters of the film have lots of potential, but the failure to properly develop them makes them feel much shallower than they probably should which is quite unfortunate.

Bottom Line – Intriguing idea that just doesn’t work as well as one might hope. Dunne does a fine job in the lead, but is far from perfect here. Despite this, she somehow managed to get an Oscar nomination for Best Actress for her work in this film. The story deals with some very risque themes but due to the way things are presented they never quite manage to make us care about those themes and how they relate to the characters along the way. The characters are good, but the failure to develop them on a deeper level hurts things too much.

MovieRob’s Favorite Trivia – The dialogue from this film is re-used in the film Bedtime Story (1941), in which Fredric March portrays a playwright and Loretta Young his actress wife. All the dialogue in March’s new “play” is actually from the screenplay of this film. It’s virtually word for word, with only the heroine’s name changed. The “gardener” referred to in the dialogue is of course Melvyn Douglas. Columbia Pictures, the distributor of “Bedtime Story,” made this film, too, but none of the writers overlap between the films. Interestingly, in “Bedtime Story,” the actors playing the onstage scene are not meant to be in a comedy. What is borrowed is the confrontation over the gardener between Theodora, her aunt, and the local club ladies. Also, in an early scene, March has an inspiration for the last line of his play – something about nobody in the town ever calling the heroine “baby” before – an idea that figures in “Theodora Goes Wild” as well. (From IMDB)