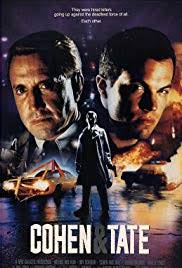 “I’m not gonna warn you again. Let’s all just try to make back to Houston in one piece. Because the way things are going, one of us won’t.” – Cohen

Brief Synopsis – Two hit men are sent to kill a young witness who is under protection of the government.

My Take on it – This is a movie that I came across by accident and knew absolutely nothing about before watching it besides the fact that it stars Roy Scheider and Adam Baldwin.

This was a horrendous film that makes so little sense and comes across as being quite silly.

They fail to develop any of the characters which hurts things a lot.

The story itself moves in some very strange and poorly chosen directions which adds to the chaotic nature of the way things are presented.

Both Scheider and Baldwin play very sadistic characters bit instead of fleshing them out more, they both come across as caricatures of typical movie hit men who are constantly outsmarted b their prey.

The fact that their target this time is a young kid makes things even more absurd.

The kid is played by Harley Cross and instead of being a cute kid we can care about, he is quite annoying and there are far too many moments where one hopes that he doesn’t manage to evade these hit men.

The story is too predictable and is presented in a way that makes it so uninteresting to watch or even care about what will happen which is quite a shame.

Bottom Line – Terrible film that is extremely silly. The characters aren’t developed well enough and the story moves along in some strange ways. Scheider and Baldwin are both nice choices for these sadistic roles yet neither really manages to feel like anything more than a caricature. The boy played by Cross is actually quite annoying and doesn’t help make us care what will happen to him along the way. The story is a bit too predictable and fails to remain interesting throughout its run time.

MovieRob’s Favorite Trivia – The police cruisers seen during the finale were real Houston Police squad cars. Ford LTD Crown Victorias were used by HPD from 1983 – 1987; the last use of these squads was in 1993. (From IMDB)