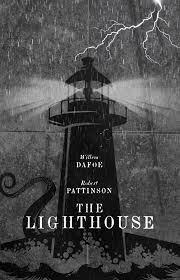 “How long have we been on this rock? Five weeks? Two Days? Where are we? Help me to recollect ” – Thomas Wake

Brief Synopsis – A young man is sent to spend a month on a secluded island as the assistant to the lighthouse keeper, but time and loneliness causes many problems for these men as they slowly begin to go insane.

My Take on it – This is a film that I chose to watch even though i had heard that it makes no sense whatsoever just to see what I could make of it.

The film was truly horrendous and was an agonizing two hours to get through because the film is too abstract and existential and fails to give us a clear linear story line that is coherent in any way.

Both Willem DaFoe and Robert Pattinson are great actors but one couldn’t tell that from watching them flail around in this film since neither are able to give us anything to enjoy.

The characters are very difficult to care about regardless of what they say or do along the way.

This is a movie that tries much too hard to work as a psychological thriller yet it had a rapid descent into insanity that causes the premise to feel even crazier and more distant than necessary which in turn makes the viewer lose all care or interest in anything that is going on throughout.

Bottom Line – Horrendous film that makes so little sense. Things are presented in a very abstract and existential way and fails to stay coherent at all. DaFoe and Pattinson are both great actors but things are done here in a way that makes both them and their characters so difficult to care about in anything the say or do. The film tries to work as a psychological thriller yet begins a rapid descent into insanity that makes things seem much too strange and distant the whole way through.  Stay away… stay far away.

MovieRob’s Favorite Trivia – Dafoe and Pattinson stated that they barely spoke a word to each other on set and were too exhausted to hang out together after a day of shooting because filming was so physically demanding due to the miserable weather conditions. While Pattinson stayed at a normal hotel with the rest of the film crew during the shot, Dafoe lived in a little fisherman cottage in solitude. On set, on the other hand, Pattinson would tend to eat and stay by himself in filming breaks, while Dafoe stayed with the crew. Both stated that they liked each other very much as soon as they had their first real conversation a few months later. (From IMDB)