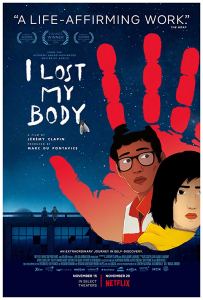 “You should switch jobs, delivery is just not your thing, y’know.” – Gabrielle

“I know. My boss keeps telling me that.” – Naoufel

Brief Synopsis – While an orphaned delivery boy tries to find meaning in his life, a severed hand takes a trip across town in an attempt to find its owner.

My Take on it – This is yet another film that I had never even heard of before coming across it on a list of films that have received acclaim during the recent awards season.

This is actually a strange yet intriguing film because despite its quirkiness it manages to work quite well.

The animation style is quite wondrous to look at which helps make the story feel even more fresh and unique.

The look and feel of it all is great and the story manages to stay intriguing along the way.

The main character is given a great and complex arc that allows for things to move at a great pace while he is on his journey to find meaning in his life and the path it has led him on.

The film is split between two stories and the one featuring the dismembered hand is able to actually show how much devotion this limb has in finding its owner.

It is willing to go a very far distance in order to reattach itself to its lost body once it is able to find it.

This is a film that has a story that deals with some very intriguing themes and that actually helps make things even more enjoyable and engaging to watch unfold.

Bottom Line – Strange kind of film that actually works quite well. The animation is wondrous to look at and that helps make this story feel even more fresh and unique both from a viewpoint of the story and of the look of it all. The main character is given a great arc and that allows for things to move along at a great pace during his quest for meaning in his life. The aspect of the story that deals with the hand is one that shows how much devotion this limb has for its owner and is willing to go the distance to find a way to reattach itself once it finds him. The story deals with some great themes and that helps make it even more engaging to watch unfold. Recommended!

MovieRob’s Favorite Trivia – According to Jérémy Clapin, his goal is for viewers to forget they are watching an animation film by making the film structured as a puzzle. (From IMDB)