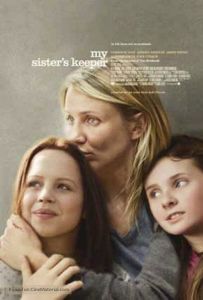 “Our family is kind of disconnected. Dad’s relatives are wealthy and distant, and Mom’s side drives her crazy. So besides Aunt Kelly, we never really get to see anybody except on holidays or disasters.” – Jessie

Brief Synopsis – A young girl decides to sue her parents when they insist on using her as a donor for her sick sister.

My Take on it – This is a film that I saw for the first time slightly over a decade ago and was the very first film that I watched with my (present) wife since she had recently read the novel it is based on.

Both of us didn’t recall much of the story, so we decided that it was time to revisit it.

This is a story that works really well largely due to the performances by the characters who all truly feel like a family as the story moves along in directions that they can handle and in others which are much more difficult.

We are given a very clear idea of the difficultes that this family must face when dealing with this life threatening disease and we get an intimate look at how their family is slightly torn apart during their familial battles along the way.

The cast is superb and is led by Abigail Breslin who does a wonderful job in the lead role.

She is helped along the way by Cameron Diaz, Jason Patric and Alec Baldwin who all are able to show what is important to all of them in life as the story begins to take form and we get to see the complexities of it all.

There are a few scenes featuring Joan Cusack which are quite moving and poignant and help add a whole new layer of understanding to the lives of these characters and all that they must deal with as a supplement to the disease itself.

The film does a wonderful job taking its time developing these characters and this enhances the way that we look at the plot because it manages to make things feel even more personal as the story itself progresses.

Bottom Line – Very intriguing concept that works really well largely due to performances of the characters. We get a clear idea of how a family dealing with a life threatening disease can be torn apart by the internal familial battles and they present them really well here. The cast is superbly led by Breslin who is helped by Diaz, Patric and Baldwin in establishing what is most important in life. The scenes with Cusack are quite poignant and add so much to the understanding of these characters and all that they are going through in life. The film takes its time developing these characters which enhances the way we look at the story and that in turn makes the plot feel even more personal at things progress. Recommended!

MovieRob’s Favorite Trivia – Real-life sisters Elle Fanning and Dakota Fanning were originally set to play Anna and Kate Fitzgerald, but bowed out after Dakota Fanning reportedly refused to shave her head, as required for the part. (From IMDB)