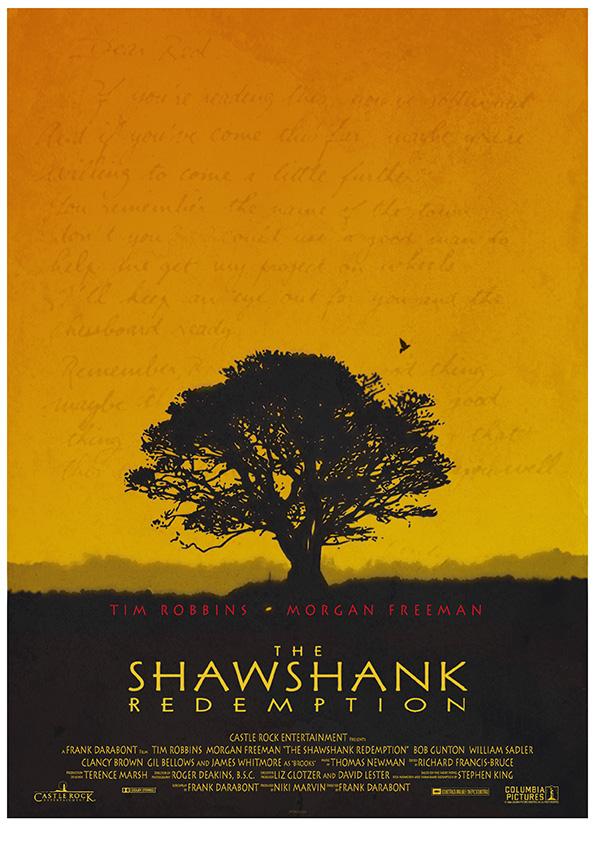 Let’s continue with… The Shawshank Redemption (1994)

“[narrating] The first night’s the toughest, no doubt about it. They march you in naked as the day you were born, skin burning and half blind from that delousing sh*t they throw on you, and when they put you in that cell… and those bars slam home… that’s when you know it’s for real. A whole life blown away in the blink of an eye. Nothing left but all the time in the world to think about it.” – Red

Initial Viewing Memories – Saw this film in the theater when it came out on a whim with some friends and didn’t even realize until half way through that I had read the novella it’s based on numerous times beforehand which helped me recall certain aspects of the story before they happened.

Brief Synopsis – After being falsely accused of murdering his wife a banker i sentence to life in a maximum security prison and must find the strength to endure all of the hardships as he tries to find a way to become free.

My Thoughts – Amazing film that is one of the very best Stephen King adaptation which stays quite true to the original story.

Morgan Freeman and Tim Robbins are superb in the roles of the two leads and the chemistry between their characters is ecstatic throughout as we see their friendship build over the course of the film.

The film’s message of hope and perseverance when one s in dire situations is superb and rings true no matter how many times one sees this film.

The supporting characters are also great to watch since most of them are developed distinctly from one anther which helps show the small cadre of friends who just happened to be convicted criminals yet they usually don;t act as one would expect.

The film’s cinematography is exquisite and the best shots are the ones when they use crane shots showing the vast nature of the grounds of the prison along with the crowds of convicts moving along.

This allows for the viewer to get a very clear idea of the layout of the prison grounds while also establishing that this isn’t a very small place to live in.

The music is superbly set for the story and helps evoke even more emotions as the story begins to unfold in ways one never expects.

The film expertly uses narration to help move the story along and that actually makes the fact that this story takes place over more than twenty years not seem drawn out at all.

This is one of the best films ever made and despite getting 7 Oscar nominations, it was completely shut out that year.

It’s popularity soared when it was released on video and stared playing on cable.

MovieRob’s Favorite Trivia – Frank Darabont dropped the “Rita Hayworth” element of the novella’s title, because he thought he’d receive resumés from actresses, thinking the movie was a Hayworth biopic. It didn’t do any good. During casting, Darabont received a call from an agent who represented a supermodel; he swore the script was the best she had ever read, and that she’d be perfect for the (non-existent) part of Hayworth. (From IMDB)