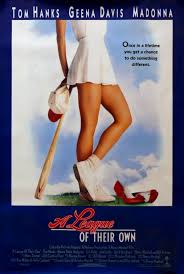 “Are you coming? See, how it works is, the train moves, not the station.” – Ernie Capadino

Brief Synopsis – Two sisters with a rivalry between them join the first woman’s baseball league during World War II and must put aside their differences in order to help this new and controversial league succeed.

My Take on it – This is a film that I have loved ever since I first saw it in the theater 28 years ago.

This movie finds a way to bring some very powerful issues to the forefront that says so much about this period of history.

This story is a fictionalized version of things that happened in real life and they find a way to capture these events so well especially since the look and feel of it all is so realistic.

Geena Davis and Lori Petty are both great here as the rivaling sisters who are able to show us their rivalry and love for one another at the same time which adds a whole new dynamic to things.

The supporting cast is great with Rosie O’Donnell, Madonna, David Strathairn and Jon Lovitz adding so much to things along the way that bring forth a nice perspective to these events.

The best character here tho is by far Tom Hanks who is able to show how great an actor he is with this role.

His character has such a great arc and we get to see his acting abilities hit all the marks in the gamut as his character is slowly developed along the way.

He is able to give us moments of joy, sadness and humor while also making us care so much about his character who grows a heart along the way.

No other character comes even close to topping what he does here.

Penny Marshall was a perfect choice to direct this film and she is able to transport us to a different time and place so smoothly while at the same time bringing us some very poignant and powerful characters and messages along the way.

The music is superb here and the two theme songs are so enjoyable to listen to.

Check them out here:

This Use to be My Playground

Each of these songs are quite powerful and emotional and bring the message of the film to a point where things become so personal along the way.

Bottom Line – Amazing film that is able to bring so much to the forefront about this period of history.  The story itself is a fictionalized version of how things happened, but they manage to capture the look and feel of this kind of story really well. Davis and Petty both are superb in their roles and make us believe their rivalry and sisterly love for one another at the same time. The supporting cast is also great with O’Donnell, Madonna, Lovitz and Strathairn helping to bring things into perspective. Hanks shines in the role of the team manager and is able to give us such a diverse character to watch as he grows and develops over the course of the film. He is able to give us moments of joy, sadness, and humor while also giving us a few scenes that show how great an actor he can be because they just blow everyone else out of the water along the way.  Marshall was a splendid choice to direct this film and this is among her very best work because she is able to transport us seamlessly into another time and place while at the same time being able to keep things so poignant and fun at the same time. The music is great and the two songs used in the film are both quite powerful and emotional which add another level to it all. Highly Recommended!

MovieRob’s Favorite Trivia – The “strawberry” bruise Renée Coleman received on her thigh while sliding into a base remained for over a year. (From IMDB)