Let’s continue with… The Lord of the Rings: The Fellowship of the Ring (2001) 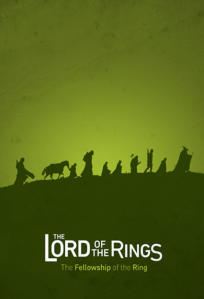 Initial Viewing Memories – This was an extremely highly anticipated film when it was being made largely due to the fact that they filmed all 3 together and I was one of geeks who went to the very first showing on opening day (as I also did wit the next two films in the series.)

“I wish the ring had never come to me. I wish none of this had happened.” – Frodo

“So do all who live to see such times. But that is not for them to decide. All we have to decide is what to do with the time that is given to us. There are other forces at work in this world Frodo, besides the will of evil. Bilbo was meant to find the Ring. In which case, you were also meant to have it. And that is an encouraging thought.” – Gandalf

Brief Synopsis – A young Hobbit is tasked with taking a powerful magical ring to its birthplace in order to destroy it before evil can overtake the whole land of Middle Earth.

My Take on it – This is my personal favorite of this trilogy (and of all 6 films about Middle Earth).

The story does an amazing job developing the way that the world of Middle Earth works and more importantly the differences between the various races and how they interact with one another.

Th characters that are so important to this trilogy are developed so well in this film and endear them to us so much because the story has enough time to understand and get to know these characters.

The music is superb and helps bring the viewer into a whole new world that is so different from what we know yet quickly feels so familiar due to the way that they do things here.

The special effects helps make this “foreign” world filled with lots of different races of characters feel so realistic since things flow so well together without a feel that we are watching something that is “fake”.

The action scenes are choreographed and played out so well that it add so much to the thrilling aspects of this story which has lots of magical and mystical parts that help move things along really well.

The cast is quite talented and each plays their part so well that we easily can believe that they truly are these characters and not just actors playing them.

This movie was able to break the glass ceiling at the Oscar and allow for a film in the Fantasy genre to garner the most nominations in a given year along with also being the first film in the genre to get a Best Picture Nomination.

This film’s nominations and acceptance by the Academy would help pave the way for its sequel to also get lots of nominations and then having the third film in the trilogy to actually plow through and win EVERY award it was nominate for essentially dominating that given year with 13 wins.

This is all due to the way that this film is used to establish the world and characters of this story.

MovieRob’s Favorite Trivia – According to Sean Astin in the Extended DVD commentary, when Bilbo drops the Ring before leaving Hobbiton, the floor was magnetic to prevent the Ring from bouncing. This was done to demonstrate the importance and weight of the Ring. (From IMDB)