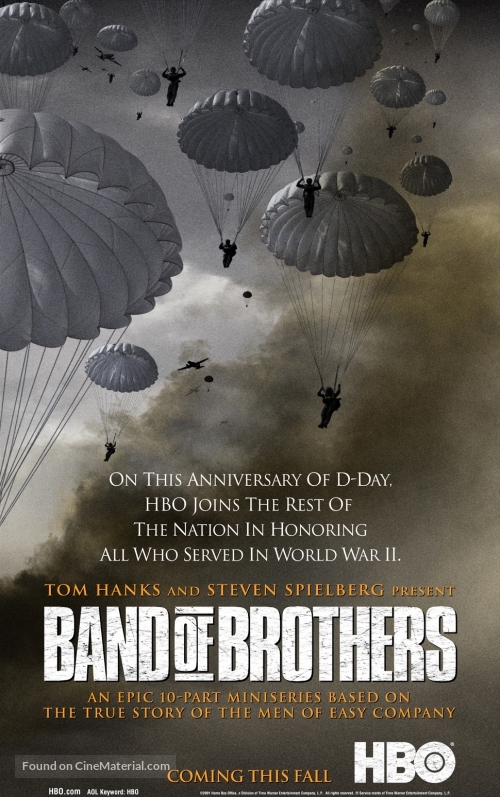 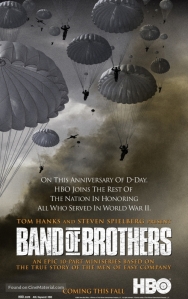 Initial Viewing Memories – Watched this miniseries as it aired weekly and was enthralled by each episode one after another.  I have thoroughly enjoyed watching it every time since because it is such a comprehensive and intimate look at comrades in battle and feels so realistic throughout.

“[narrating as Lieutenant Speirs runs across the battlefield] At first the Germans didn’t shoot at him. I think they couldn’t quite believe what they were seeing. But that wasn’t the really astounding thing. The astounding thing was that, after he hooked up with I Company, he came back.” – Carwood Lipton

Brief Synopsis – A company of paratroopers arrive in England right before D-Day and play an integral part in the war all the way through Victory nearly a year later.

My Take on it – Excellent film that allows the viewer to gt a deeper understanding of the camaraderie of soldiers during battle.

This film does an amazing job giving us a very comprehensive look at the life of soldiers during World War II and how these men from diverse backgrounds found a way to bond during their time together.

Each of the ten episodes focuses on a different character and a different perspective on their shared experiences which enhances the viewers understanding of everything that these men went through.

The story is told really well and allows us to get more emotionally attached as characters who we get to know along the way are wounded or killed in action which adds an even deeper level of realism to it all.

The cast is superbly chosen and Damien Lewis is amazing in the lead role because he truly shows us what kind of commander these men had and why he also had such a strong bond with his soldiers.

The film gives us a comprehensive look at life for an Airborne soldier during the days leading up to D-Day and during the European campaign against the Germans all of the way through the surrender one year later.

The realism of this story shines throughout and makes it even scarier to see what these men went through during their war experiences in Europe.

One of the best (anti) war films that truly shows how Hellish war can be especially on friendships and bonds that are forged under fire.

MovieRob’s Favorite Trivia – The black and white “Invasion stripes” on the wings of the C-47 in the scene where the soldiers are entering the plane are wavy and sloppily painted. This is accurate. The word went down to all allied air units on June 4th to paint broad stripes on the planes for recognition. Maintenance personnel used paint brushes, many of them purchased from English retailers, to paint the stripes on thousands of planes, literally overnight. Concerned that the Germans might use Allied aircraft, captured during and before Dunkirk, to infiltrate and destroy Allied air formations, the so-called “invasion stripes” were added to identify friendly planes. (From IMDB)