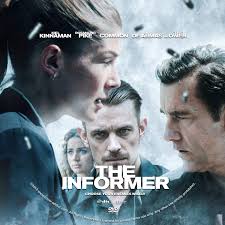 This review is part of the Monthly ABC Film Challenge over at Movie Reviews 101. This month’s theme is Missed films from 2019.

“I don’t have kids, I would suffer too much if something happened to them. ” – Klimak

Brief Synopsis – An ex-con working undercover for the FBI is sent back into prison in order to get in deeper with the mob.

My Take on it – This is a film that I recently heard about and it seemed quite intriguing, so I decided to check it out.

Unfortunately, the entire film’s plot and story is told in the trailer which is quite a shame.

The story itself is told in a very generic way that feels like they are just copying the ideas of other films and using them here with the hope that no one will notice.

The way that things unfold is done in a very predictable manner and that hurts things even more because there are no surprises along the way or even any twists or turns that would help make this more thrilling instead of being a dud.

What is most surprising is the fact that this film sports a nice cast and they are all wasted because of the fact that nothing interesting happens at all.

Rosamund Pike and Clive Owen are the most wasted here and neither has enough to do with their stereotypical characters.

The way that things are presented make the viewer feel as if they are trying much too hard to do something special here yet never succeed at any point because it comes across as being quite uninteresting throughout.

If you wanna save time, just watch the trailer and you basically will understand the whole plot…

Bottom Line – Very generic crime film that fails to bring anything new to the forum. The story is quite predictable in so many ways which takes away the fun of trying to watch this film because it all seems like it’s been done before. The cast is completely wasted here and I’m a bit shocked that some big named actors chose to partake especially Pike and Owen.  The story tries too hard to want to do something more and completely fails the whole way through which is a shame.  The trailer basically gives away the whole film, so it’s easier just to watch it instead of sitting through two hours of this turkey.

MovieRob’s Favorite Trivia – Part of this movie was filmed in an abandoned prison in Gloucester, UK (From IMDB)