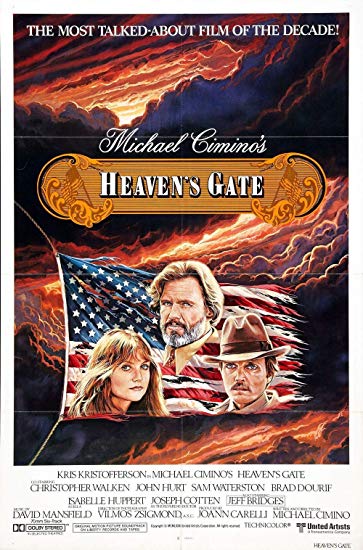 “You’re not my class, Canton, and you never will be. You’d have to die first and be born again.” – James Averill

Brief Synopsis – A local Marshall in Wyoming territory does all he can to try and help citizens of his town after they are targeted by a cattle baron who wants to hire mercenaries to kill all of them.

My Take on it – This is a film that notoriously known as being one of the biggest box office flops in history.

The film clocks in at an astounding 217 minutes and is not the easiest movie to get through because much of the story moves extremely slowly and drags on too much.

Perhaps if this story was trimmed a bit more, things would have been more engaging and enjoyable to watch instead of being such a chore to get through due to the way that they present things.

What’s shocking is that bot the cast and crew are quite talented and normally one wouldn’t expect such a travesty to come from these industry leaders.

Kris Kristofferson, Christopher Walken, John Hurt, Sam Waterston , Isabella Huppert and Jeff Bridges are all great in their roles and allow us to meets some very interesting and intriguing characters.

The story is overly long and things get a it confusing here and there due to the way that they have things move along.

The exposition in the story is too much and there are far too many scenes that could have been sped up a bit and this actually detracts from the urgency and importance of all that is going on here.

What is quite frustrating about this film is the fact that they had a potential great story that in better hands might have been presented in a much more competent and intriguing way.

The movie is filled with an epic feel throughout, yet that is also detrimental to the story because instead of feeling as of the tale is being told in a very succint way, it seems to drag on for much too long which is quite problematic.

Bottom Line – Intriguing idea that fails to work largely due to the fact that the story is dragged out too long. At 217 minutes, this film truly should have been trimmed a bit in order to make it more enjoyable and engaging for the viewer. The cast is stellar here with Kristofferson, Walken, Hurt, Waterston, Huppert and Bridges all giving us some intriguing characters.  The film has far too much exposition and there are too many scenes that move along much too slowly and take away from the urgency and importance of things that are transpiring.  This is a film that is notoriously known as a complete flop, but it has some great ideas that could have been presented in a more competent way which would have made this more enjoyable to watch unfold.  The film has a great epic feel to it, but that is one of the reasons that the story seems to be dragged out instead of told in a more succint way.

MovieRob’s Favorite Trivia – Considered one of the most notorious screen disasters in the history of film. After struggling with personal movies that went nowhere, Writer and Director Michael Cimino finally got to make The Deer Hunter (1978), a very personal project that brought him critical and commercial success and earned five Academy Awards. Afterwards, United Artists was willing to allow him anything he wanted. Cimino got 11.6 million dollars to make his next project, which was initially budgeted at 7.5 million dollars (according to Steven Bach’s “Final Cut”). The movie was to be a simple lower-budget western about a land war in Johnson County, Wyoming, featuring a first-rate cast. It went over budget almost immediately, mostly due to Cimino’s insistence on absolute perfectionism. Stories abounded that he was tearing down sets for no reason, and hiring and firing crew members almost weekly. Many of the stories were exaggerated, but the movie ballooned to a then-astronomical sum of forty million dollars (one hundred twenty-six and a half million in 2015 dollars). When Cimino presented the movie to United Artists, it ran well over five hours. After some squabbling, he agreed to trim it down to less than three hours. The movie was a commercial and critical disaster that destroyed Cimino’s career as a director, and nearly bankrupted United Artists. The studio was sold to MGM. That year, MGM had a hit in For Your Eyes Only (1981). Cimino didn’t work for another five years, and his career never recovered. When Waterworld (1995) was being made, its production encountered so much difficulty, and Kevin Costner received so much negative press concerning the shooting, it was called “Kevin’s Gate”. (From IMDB)