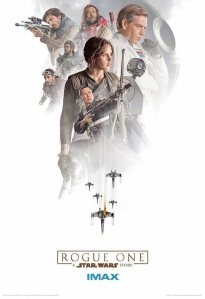 Initial Viewing Memories – As a Star Wars fan, I was so psyched to see this film after it was announced. I saw it on the first showing the morning of its debut and went back a week and a half later to see it again on the big screen.  This is my favorite Star Wars film outside of the original trilogy.

Brief Synopsis – A group of rebels are sent on a mission to recover the plans of the Empire’s new deadly weapon in order to find a flaw in its design and destroy it.

My Take on it – Superb addition to the overall Star Wars story that works so well.

This film is a side story to the main story thread of the series and it manages to find a way to keep things impactful despite the fact that we already know the ultimate outcome of this mission.

The fact that they are able to create new and innovative characters helps make this story even more enjoyable to watch because nothing they say or do is connected to the “Skywalker” storyline.

The film does an excellent job making us realize that things still take place in the same Galaxy as the other stories yet things still seem somewhat disconnected.

The special effects help enhance the story even more because we get to see things move at a great pace due to the way that they present things to us.

Love the way that this movie has some nice “hat tips” to the original trilogy and that works really well in establishing the way that the story moves along.

The battle on Scarif is so enjoyable to watch because we finally get to see how a real ground assault works in the Star Wars universe.

The story itself is more thrilling than any of the other films in the series because of the fact that the characters fates are all unconnected to the rest of the films and that adds to the suspense since we never know what can happen to these characters.

I really hope that now that they have finished with the recent trilogy, they will create new stories that take place in the Star Wars world to help expand and establish this rich world that has so much more potential.

Can’t wait to see this again because it is so much fun to watch!

MovieRob’s Favorite Trivia – The space battle features the Blue Squadron of X-wings (as well as Red Squadron and Gold Squadron already known from the original Star Wars: Episode IV – A New Hope (1977)). Blue Squadron was supposed to be in the original film, but because the blue color on the fighters created issues with the blue screen technique that could not be overcome with the technology available in 1977, the color was changed to Red. (From IMDB)