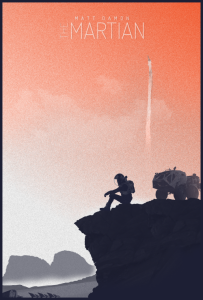 Initial Viewing Memories – This was a highly anticipated film that was so enjoyable to finally see especially given my love for films about space travel.  This film is done in a really plausible and realistic way.

“In the face of overwhelming odds, I’m left with only one option, I’m gonna have to science the sh*t out of this.” – Mark Watney

Brief Synopsis – Following a mishap during a space mission to Mars, an astronaut is stranded on the planet by himself and must try and find a way to survive until a rescue can be launched.

My Take on it – Spectacular story that is quite gripping the whole time.

They do an amazing job blending humor and drama into this story which helps keep things flowing really well.

The cats is great and Matt Damon does a wonderful job carrying this film.

The supporting cast is also chosen really well and help keep the story so enjoyable the whole way through.

The film integrates the music into things really well and helps the pace flow smoothly.

Th story takes place in the near future and the science and technology is created really plausibly which helps make things feel so realistic.

Love the way that this film is able to juggle various characters in different parts of the galaxy at the same time and bend the story together in a way that makes things feel so much more interesting.

In essence, this is a superb modern retelling of a Robinson Crusoe type of story and shows how timeless this kind of story can be.

MovieRob’s Favorite Trivia – Matt Damon admitted that the scene where Mark was getting emotional upon hearing Commander Lewis’ voice was genuine. The other actors had wrapped and gone home, and their pre-recorded voices were actually being played to Damon from inside his spacesuit. When Damon began to think about how his character had been all alone on Mars for two years, alongside how he was only hearing pre-recorded voices of his co-stars who had already finished their scenes, he began to tear up. Ridley Scott was so impressed with Damon’s performance, that he only did one take of the scene, which was used in the film. (From IMDB)