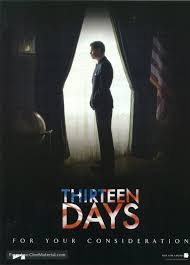 Initial Viewing Memories – Saw this in the theater during a trip to the US in Jan 2001 and was entranced during the viewing because of the way that they are able to keep this story so gripping and thrilling the whole way through.

“[to RFK] You’re a good man; your brother is a good man. I assure you there are other good men. Let us hope the will of good men is enough to counter the terrible strength of this thing that was put in motion.” – Dobrynin

Brief Synopsis – President John F. Kennedy and his staff must find a way to stop the Soviet buildup of nuclear weapon in nearby Cuba.

My Take on it – Spectacular film that is able to take such a tense political situation and show how things played out bit by bit.

The ability to see the inner workings of government during a time of crisis like this is quite fascinating and they do a wonderful job presenting things in a very realistic fashion.

The story is filled with lots of twist and turns that help show how close the world came to World War III and that raises the suspense of everything that happens.

The music by Trevor Jones is done amazingly and that helps add so much to the way that this film’s tense storyline works.

The cast is superb.

Kevin Costner does a great job in a role as the “unknown witness to history” but Bruce Greenwood and Steven Culp are what make this film even more enjoyable to watch with their performances here.

They play the Kennedy brothers so well that there are numerous times where it is difficult to recall that they are just acting like these great men instead of actually being them.

The dialogue is exquisite to listen to because it is filled with so much political detail that things flow so well especially when they need to try and explain somewhat complicated military or political jargon.

This is a great example of a historical film bringing an event to life in ways that one could never expect while at the same time keep things so tense and suspenseful even if we know the eventual outcome of it all.

MovieRob’s Favorite Trivia – On February 1, 2001, this was the first film to be screened at the White House by President George W. Bush and Laura Bush. In attendance at the historic screening were members of the Kennedy family, members of Congress and personal friends of the President and First Lady. (From IMDB)