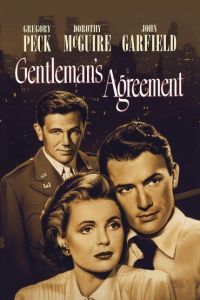 Initial Viewing Memories – Came across this years ago while watching Oscar winning films and had no idea that such a subject could be done so powerfully even during the 1940’s.

“So far I’ve been digging in facts and data-I’ve sort of been ignoring feelings.” Phil Green

Brief Synopsis – A reporter goes under-cover as a Jew in order to write an expose on antisemitism in modern society.

My Take on it – This is a film that despite seeing numerous times over the years still amazes me as to how poignant and realistic a film can be even when it tries to shed light on social issues.

What always surprises me the most tho is the fact that this film which was made right after World War II, never needs to use the idea of the Holocaust in order to get its point across.

The ideas of antisemitism and hatred towards others is an age old issue that was relevant in 1947 when this film was made and even now, 73 years later.

The world hasn’t changed much in the intervening decades and that is something that makes one wonder how change can be affected over time since certain issues have yet to find a way to be solved so simply.

Gregory Peck is excellent in the lead role and plays his character quite well.

The supporting cats is also great here and the two standouts are a very young Dean Stockwell as Peck’s son and a small cameo by Sam Jaffee who’s character tries to find the true answer to the age of question of hatred.

The movie does a great job showing how the system works against those who try to bring change largely due to the fact that most people never truly wish to confront the truth about these issues and would rather keep silent by sweeping things under the rug whenever possible.

The film’s dialogue is great and they are able to use codes and euphemisms quite often when trying to explain and justify some of the actions and reactions of the characters.

This film was definitely quite deserving of its Oscars for Best Picture and Best Director even if it works better in theory instead of practice since as history has already proven, not much has been changed over the years in the realm of hatred described here.

They also do a great job here of showing how the characters need to reevaluate their own ideas and prejudices based solely on how they react on instinct to things instead of how they presume that they would act when given the situation.

MovieRob’s Favorite Trivia – When other studio chiefs, who were mostly Jewish, heard about the making of this film, they asked the producer not to make it. They feared its theme of antisemitism would simply stir up a hornet’s nest about a problem which they preferred to handle quietly. Not only did production continue, but a scene was subsequently included that mirrored that confrontation. (From IMDB)