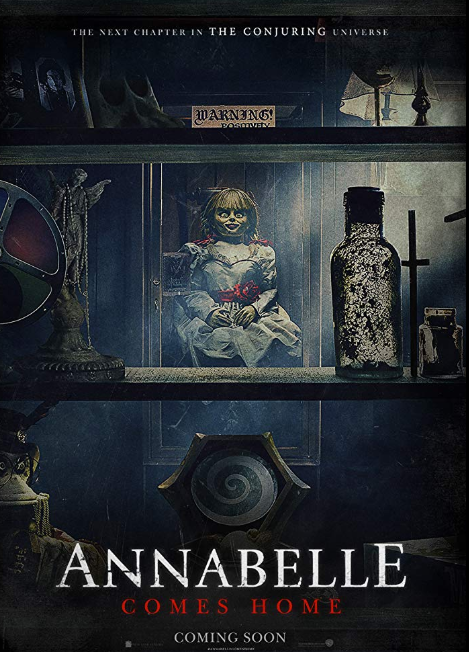 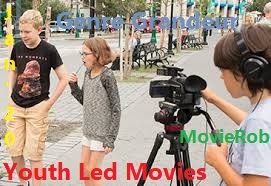 For this month’s next review for Genre Grandeur – Youth-Led Movies, here’s a review of Anabelle Comes Home (2019) by Darren of Movie Reviews 101.

Thanks again to Sally of 18 Cinema Lane for choosing this month’s genre.

Next month’s genre has been chosen by Bubbawheat of Flights, Tights, and Movie Nights and we will be reviewing our favorite Animated Comic Book/Strip Movies. 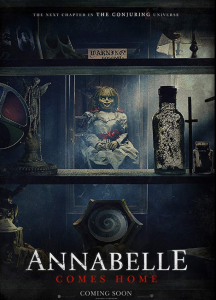 Annabelle Comes Home is the latest addition to the Conjuring Universe, with the two Conjuring Films being the stand out in the franchise, the first two Annabelle films were a complete mix, now with the third installment, which does connect Annabelle with the Conjuring by focusing on the Warren family.

The story follows the daughter of the famous couple, Judy (McKenna Grace) as she is left with her babysitter Mary Ellen (Madison Iseman) for a weekend, while Lorraine and Ed are off on their latest piece of work. When one of Mary’s friends Daniela Rios (Katie Sarife) learns about the job, she wants to visit and soon finds her way into the artifact room, unleashing the power of the Annabelle doll.

What makes this version of the Annabelle film so unique and interesting to watch, is the fact we learn about many of the less significant artifacts that Warren’s have dealt with, ones that we could easily get an enjoyable horror out of. By not giving us too much, we don’t learn too much about the origin of the artifacts either. Outside of the world building for future films, we do have a very interesting idea of how a young girl in Judy would be suffering from growing up around parents that worked in the supernatural, giving her unfair judgement from her classmates, making her feel very isolated within her own world. The character of Daniela does show us how a teenager would consider anything to get one last chance to communicate with a lost relative.

This might resort to a lot of jump scares, but they are all built up well, play into the spirits strength to get the best reaction in fear, while having three entertaining performances from the leading three young ladies, if you are coming into this film to learn more about Vera Farmiga or Patrick Wilson’s versions of the Warrens you will be left disappointed because they are mostly extended cameos.