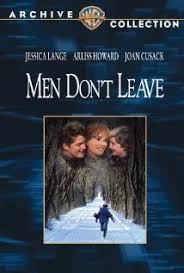 Brief Synopsis – After her husband is killed in a work related accident, a widow and her two young sons try to deal with the debt and problems that he left behind.

My Take on it – This is a movie that I recall seeing on cable as a teen yet didn’t remember much about what it was all about.

The cast is quite talented with Jessica Lange, Arliss Howard, Joan Cusack,Kathy Bates and Chris O’Donnell (In his screen debut), yet none of their characters are developed well enough along the way for us to truly care about them.

Lange does a fine job in the lead and is able to show the various emotional burdens on her character both with regard to her family and work, but something always feels missing still.

The kids themselves are a bit underdeveloped and they both do some very strange things with their characters which makes them seem a bit weird.

The story seems to try much too hard to want to add more and more tangents to the story of these characters in order to establish how chaotic these kind of situations can be but in doing so, they end up making things even more confusing instead of poignant.

The movie also adds in numerous aspects to the story that never seem to be resolved despite the fact that they are aspects that shouldn’t be glossed over or ignored because they are quite shocking to learn about yet discarded.

Bottom Line – Interesting premise that doesn’t work as well as one might hope. Lange is great in this role and shows the various emotional burdens placed on her character both with regard to her family and her work. The kids are a bit too underdeveloped and even O’Donnell in his debut seems a bit strange with what he does with his character. The story tries too hard to encompass to many different side stores to try and establish the real chaos of the situation but in the end just makes more of a confusing mess of things along the way. There are also some aspects of the story line that are quite shocking, yet the story glosses over them and fails to deal with them properly.