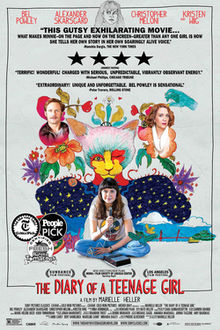 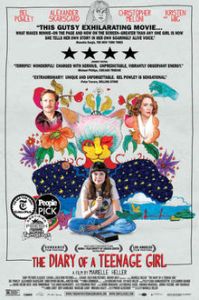 “So, maybe nobody loves me. Maybe nobody will ever love me. But maybe it’s not about being loved by somebody else. ” – Minnie

Brief Synopsis – A young girl’s life is turned upside down when she falls in love with her mother’s current boyfriend.

My Take on it – This is a film based on a comic book that might look and feel off the wall, yet they find a way to still make things wok despite this.

The story moves in some very strange directions along the way but they are able to find the ability to make things feel believable and realistic through most of what occurs before us.

This film does a nice job getting into the mind of a teen-aged girl which helps make us believe most of what happens here.

The characters in the film aren’t developed well enough and that makes it harder to care about what happens to them or what they will end up doing.

The cast is pretty good here and they help make these characters feel a bit more realistic even if they go a bit over the edge in certain situations.

Bottom Line – Off the wall film that actually works quite well despite this. The film moves in some very strange directions yet still remains quite believable the whole time. They are able to truly get into the mind of a teenager which adds to the reality of things.  The characters unfortunately aren’t developed enough and that is somewhat problematic because we want to care more about them and everything that they do.  The cast is quite good here and help make things work better even when there are certain situations that seem to go a bit over the edge.

MovieRob’s Favorite Trivia – Bel Powley’s American agent sent her the script and she loved it so much that she sent an unorthodox audition tape: she was doing a scene in Minnie’s bed, so she shot it in bed, in her underwear. And then added a separate little bit to the end of the tape talking directly to the camera, talking to Marielle Heller [the director] basically saying how much this film resonated with her, how much it would mean. Heller and Powley Skyped, got on well, and then Powley flew out to New York and met with Alexander Skarsgård. (From IMDB)