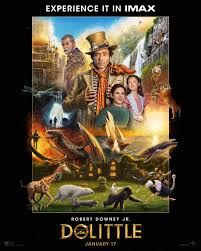 “We’ve no choice but to embark on this perilous journey.” – Dr. John Dolittle

Brief Synopsis – The famous doctor who can talk to the animals sets off on an adventure to find a mysterious island in order to save the life of the Queen of England.

My Take on it – This is a film that I was curious to see largely due to the fact that now that Robert Downey Jr. has hung up his Iron Man suit, I wanted to see whether he would be able to successfully take on new project completely unrelated.

Unfortunately, as great an actor as he can be, one couldn’t know it by just watching this film since he seems so much out of his depth with this kind of story line.

The film and it’s plot don’t work at all and it all comes across as a farce instead of a fun adventure film as one would hope and expect for.

This is truly a horrendous adaptation of the classic tale and fails to have any real redeeming qualities.

The only part of this film that is on any level worth watching for is the special effects.

They manage to do an amazing job animating these animals in a way where it looks quite realistic since they all seem so real.

Unfortunately tho, this isn’t enough to make things more enjoyable or engaging to watch largely due to the way that things come across in a far too campy style.

Bottom Line – Terrible updated version of this classic tale. Downey is a great actor, but seem out of his depth with this story which doesn’t manage to work at all. The best part of this film are the special effects which make the animals come to life in so many ways but unfortunately that just isn’t enough to make this any more enjoyable to watch because it all comes across much too campy throughout.

MovieRob’s Favorite Trivia – This movie was originally going to be released on May 24, 2019 by Universal Pictures, but was moved to April 12, 2019 to avoid competition with Star Wars: Episode IX – The Rise of Skywalker (2019). It was later pushed back again to January 17, 2020. This concerned many because January is when studios have historically released movies they feel will fail. The report that this movie went through almost a month of re-shoots and re-writes supported this concern. (From IMDB)