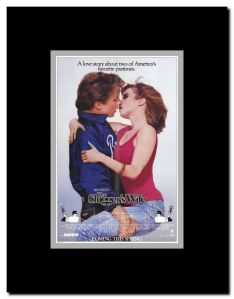 Brief Synopsis – A baseball player in a slump finds his game and his life surge when he meets a young singer in a local club who becomes his lucky charm.

My Take on it – This is a film that I recall seeing a few scenes of as a kid yet never saw the whole thing.

It has been a notoriously famous film in my mind because I recall the fact that Bucky Dent (my favorite baseball player as a kid) had a small role in this film.

This is an overall fun baseball movie but it gets dragged down by the way that it turns much too melodramatic along the way.

Michael O’Keefe and Rebecca DeMorney both have great chemistry together here and there are scenes that are quite sizzling and feel believable.

The problem is that many time,s in the following scene, they have lost that momentum an things are much too boring and bland.

The idea of trying to show how two professionals dedicated to their careers would deal with a clash between their jobs is a good one yet they don’t manage to present things in a more enjoyable way.

Bottom Line – Fun baseball film that loses it’s way because it gets bogged down by too much melodrama. The idea of showing how these two people’s lives and careers clash works well but they then make the characters become a bit too clingy and that hurts things too much. The baseball scenes are done well and it’s a lot of fun seeing some real ballplayers with cameos.  Th chemistry between O’Keeffe and DeMorney is quite good and the scenes where things go well for them feel very realistic and believable even if in the following scene, they are meant to act in the opposite way.

MovieRob’s Favorite Trivia – According to an article in the October 2008 edition of Sports Collectors Digest, Topps briefly produced a 1984 Darryl Palmer card to promote the film. No one knows how many still exist, but the film did so badly at the box office that the cards have no collector value. (From IMDB)