This month’s genre has been chosen by Bubbawheat of Flights, Tights, and Movie Nights and we will be reviewing our favorite Animated Comic Book/Strip Movies.

Let’s see if I felt that this movie would be worthy of being in the company of my others favorite movies in the genre of Animated Comic Book/Strip Movies..… 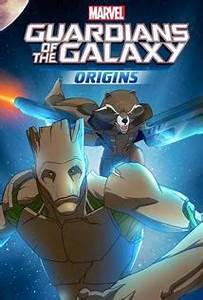 “And that was a start of a beautiful friendship.” – Rocket

Brief Synopsis – Short film that tells the back stories of the five members of The Guardians of the Galaxy in the time before they meet up in the MCU.

My Take on it – I had never even heard of the Guardians of the Galaxy before seeing the MCU movie that introduces them in 2014 and even recall not anticipating the film very much because of that.

Boy was I wrong!

They quickly became my favorite characters in the entire MCU because of the diverse way that they seem to work together in getting the job done.

This is a short film that allows us to get a better understanding of how each of these 5 characters ended up coming to the place that we meet them in that MCU film.

The film presents these origin stories in short form and that actually works really well because there is no need to go into very comprehensive detail at this point, but things might have been a bit more powerful if they had dedicated more than 4+ minutes to each of the 5.

The film sports a nice voice cast which are able to do justice for the characters endeared to us via the MCU and are just as good as the live action actors who portray these characters.

Bottom Line – Great addition to the stories of these characters.  The movie manages to show how each of them came to where they were at the beginning of the MCU film and that adds so much to it all.  The way that they present the origin stories in short forms works well but it might have been even better of they had expanded each of these stories slightly in order to give us something even more powerful. Th voice cast is also great and they do justice for the work that the live action actors did within the MCU franchise. Recommended!

MovieRob’s Favorite Trivia – A series of one-shots were released prior to the series premiere detailing the origins of several characters and events that occurred prior to Guardians of the Galaxy (2014). (From IMDB)

Genre Grandeur Worthy? – Comes really close. They do a wonderful job telling the origins of these characters, but it would have been better if it had been a bit longer.