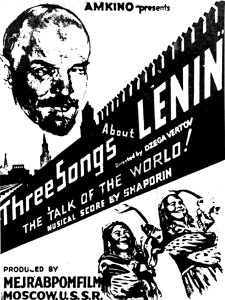 “If Lenin could see our country now!” – Propaganda Poster

Brief Synopsis – Documentary about the various changes made by Vladimir Lenin in Russian society told through pictures and short videos while using three anonymously written songs as the backdrop for things.

My Take on it – This is a film that I came across by accident while seeking out films from the 1930’s in order to expand my horizons of that decade.

I had no idea what this was about and was quite shocked to learn that it is done in documentary style with minimal dialogue and no real characters.

The entire film is accompanied by three musical pieces.

Unfortunately, this is an extremely boring film that fails to find a way to make things interesting along the way.

There is no real connection between the various pictures and videos shown and it’s even more baffling to try and comprehend what is really going on.

This film is unique in the way that they try to use these pictures and videos in order to show how much Lenin has been able to change society for the better.

It is now widely known that this film was a pure propaganda piece and it has been debunked by the fact that many of the things depicted aren’t true but rather were put in the film in order to try and show Soviet might.

The songs of the title are all fine, but without understanding them make sit even more difficult to find a connection with the pictures and that disconnect makes things even less enjoyable to watch.

Bottom Line – Really boring film that probably worked much better when it was made. The film is quite unique in the way that they show the various changes in Russian society due to the leadership of Lenin. This is a pure propaganda film and much of the pictures it uses were debunked as real because of the way that this is all depicted. The songs are fine, but without having any understanding of them makes it more difficult to make a connection between them and the pictures shown on the screen.

MovieRob’s Favorite Trivia – The aircraft from which the parachutists jump (or perhaps they were pushed) towards the end of the film appears to be an ANT-14, Pravda. Only one was built and it was used by the Maxim Gorky propaganda squadron. (From IMDB)