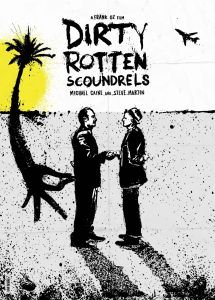 “It seems the teacher has underestimated the student.” – Lawrence Jamieson

Brief Synopsis – Two rival con-men in a small French Riviera town make a bet where the loser must leave town for good.

My Take on it – This is a film that I haven’t seen since it came out on cable years ago and didn’t remember much of it besides a few small scenes.

The story works really well especially because of the various twists and turns along the way that are just as surprising to the viewer as it is to the characters.

The cats of this film is great and both Michael Caine and Steve Martin are perfectly cast in these roles since they both manage to give us very diverse kinds of humor in the way they do things especially with regard to their tone, demeanor and delivery.

The film has some great montages of scenes that are quite funny because they deal with the same kind of shtick yet from very different angles which is so much fun to watch.

The story is constantly in motion and nothing is ever truly as it may seem which enhances things.

I was pleasantly surprised to see that Ian McDiarmid was in this film as the butler because it is so very different from the kind of roles he is used to playing especially in the Star Wars franchise.

Bottom Line – Fun film that has some great scenes that are so humorous. The cast is great and both Martin and Caine are perfect in these very devious and funny roles.  Love the way that each of them plays their character so differently and even their humor is very different in tone and delivery. The montage of scenes where these men work together has some great shtick that helps add so much to this film. The best part of this film is the fact that it is always in motion and since the characters are always trying to outdo one another, we are just as surprised as they are when the plot keeps changing directions.  Loved seeing McDiarmid in the role of the butler. Recommended!

MovieRob’s Favorite Trivia – The teaser trailer features a sequence which does not appear in the final movie. Freddy Benson and Lawrence Jamieson walk along a boardwalk, politely moving out of the way of other people, et cetera, with a voice saying something like “There are numerous distinguished gentlemen in the world… refined, cultured gentlemen… nice men… but nice men finish last”. As the last few lines are spoken, Freddy pushes an old lady into the water, and Lawrence shoves a kid’s face into his cotton candy. Director Frank Oz has said that audiences were very surprised to learn that the scene was not part of the finished movie. (From IMDB)

One thought on “Dirty Rotten Scoundrels (1988)”