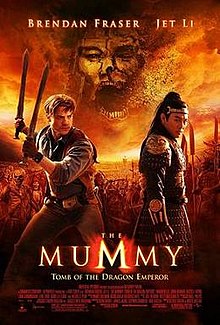 Brief Synopsis – The O’Connell adventure family once again must face the un-dead when they must travel to the Far East to deliver an ancient artifact to a museum, but things are never as they seem.

My Take on it – This is a really fun addition to the series of this Indiana Jones-like family and the story works quite well here.

Really am glad that they chose to change the venue of things to the Far East which allows them to explore a different Mummy myth while also helping keep things feel fresh and original the whole way through.

This is especially commendable since most franchises choose to rehash old ideas and use formulas that have worked in the past, but they do the opposite here and take a risk by diverging slightly from that idea.

Loved seeing Brendan Fraser back in the lead because his character is so much fun to watch as he makes quick decisions along the way.

Maria Bello is a nice choice to replace Rachel Weisz in the female lead and she makes things work.

The film utilizes some amazing special effects that help enhance this story so much while also adding more suspense to certain aspects of the plot.

Jet Li once again is able to show off his superb martial arts skills and we get some great combat scenes between the various characters.

Bottom Line – Fun continuation of the adventures of this family that works quite well. The choice to change the venue and kind of mummy actually helps keep things feeling more fresh and original instead of as a retread of what has been previously done. Great seeing Fraser back in the lead and Bello is a nice substitute for Weisz.  The special effects are amazingly done and help enhance the story and the thrills as things move along. Li once again gets to show his amazing martial arts abilities here and we get some great fight scenes to watch. The choice to leave this series as a trilogy was a wise one and I think they found a way to end it and still keep their dignity because the tone and humor still works extremely well here. Recommended!

MovieRob’s Favorite Trivia – Rachel Weisz did not appear in this third installment of “The Mummy” films, and instead, her character, Evy, was played by Maria Bello. There were differing accounts as to why this happened. According to director Rob Cohen, it was because Weisz refused to portray someone with a 21-year-old son. Weisz simply did not like the script enough to sign on. Rumours circulated that Weisz chose not to be seperated from her (toddler) son at the time, but she has since made it clear that this had no impact on her decision whatsoever, and pointed to two other films that she starred in that very year. (From IMDB)