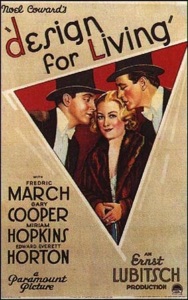 “Immorality may be fun, but it isn’t fun enough to take the place of one hundred percent virtue and three square meals a day. ” – Max

Brief Synopsis – Two friends fall in love with the same women and when she has trouble choosing between them, they decide to move in together and have a strictly platonic friendship.

My Take on it – This is a movie that I came across By accident while trying to expand my knowledge of films from the early part of the 1930’s.

As soon as I saw the cast, I was intrigued to see what this story was all about.

The premise is quite risque and it surprised me that a film form this time period dealt with such subject matter in an open and clear way.

The script is written really well and helps us learn so much about these character who become quite developed along the way.

The dialogue is filled with so many fun lines that are enhanced by lots of innuendo that alludes to so much more in some clever ways.

This actually helps set the tone, mood and pacing of things quite well.

Having Fredric March, Gary Cooper and Miriam Hopkins together here is a true delight because they have such amazing chemistry when on screen side by side.

It is quite easy to believe the friendship that this trio forges along the way.

This story actually ventures into some very strange territory yet is able to find a way to keep things fun and enjoyable throughout.

It show that timing is everything in the world because this is a film that probably wouldn’t have been made just a few months later when they began to enforce many of the censorship laws in film.

In fact, this film was banned for a while due to its content by numerous “decency” groups.

This is quite entertaining and works really well in keeping things fun throughout.

Bottom Line – Very risque premise that works quite well largely due to the great script. The dialogue is filled with lots of fun lines along with lots of innuendo that helps set the tone and mood for it all. The cast is superb and March, Cooper and Hopkins all have amazing chemistry together which helps make us believe this tight knit friendship. The story takes things into some very strange territory yet is able to keep it all enjoyable nevertheless. This is a film that wouldn’t have been made mere months later due to the censorship laws and was indeed banned for a time due to its content. Recommended!

MovieRob’s Favorite Trivia – Considerable censorship difficulties arose because of sexual discussions and innuendos, although the Hays Office eventually approved the film for release. However, it was banned by the Legion of Decency and was refused a certificate by the PCA for re-release in 1934, when the production code was more rigorously enforced. (From IMDB)