This is a post dedicated to The Sixth Annual Buster Keaton Blogathon which is taking place over at Silent-ology. 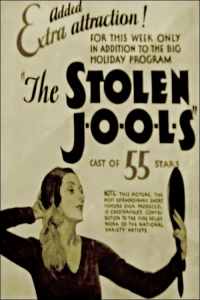 Brief Synopsis – A detective searches around Hollywood for the stolen jewelry of an award winning actress.

My Take on it – This is a film that I knew absolutely nothing about and came across it while searching for a Buster Keaton film for this blogathon.

It’s a lot of fun but unfortunately, Keaton only appears in very small cameo that last just a few seconds.

The story as presented here is a bit silly and they aren’t able to find a way to keep it engaging enough because each scene is extremely short and has very little bearing on the plot itself.

They somehow managed to get about 55 cameos of movie stars from the 1930’s to appear in this 20 minute film.

The majority have very small parts and usually if one blinks, you might miss some of them.

The film is definitely a treat for anyone who is a fan of films from this time.

I was able to recognize many of the cameos but others were actors or actresses that I had no clue as to who they were.

The two best cameos in this film are the ones with laurel and Hardy and the slapstick keystone cop routine that includes Keaton.

The story itself tho makes very little sense but I did like the way that they were able to somehow integrate all of these cameos of diverse characters into the story line.

This must have been even more complicated to do since the story is so simple and silly at the same time.

Bottom Line – The story is quite silly and fails to be really engaging but the film does manage to somehow get in 55 cameos of movie stars to take part in this short film. Most have very small bit parts here but for people who are familiar with the stars of the time are definitely in for a treat.  To make things easier, most of them play themselves which actually makes sense. The best cameos are the Laurel and Hardy ones and the use of Keaton in a short slapstick keystone copper bit at the very beginning. The story itself doesn’t make much sense, but they do find  a nice way to integrate all of these very diverse characters into this story line despite it being a bit too simple and in some scenes silly.

MovieRob’s Favorite Trivia – To modern eyes, there is a certain irony in a film raising funds for tuberculosis research being sponsored by Chesterfield cigarettes. (From IMDB)