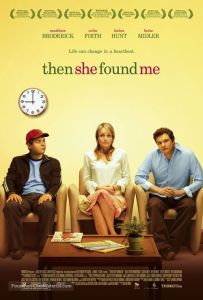 “You’ll hurt me too, you know. You’ll hurt me and change on me, you might even leave me after you promise you won’t, how about that?” – Frank

Brief Synopsis – A woman trying to deal with the problems in her marriage is stunned when her birth mother contacts here and makes her life even more complicated.

My Take on it – While searching for movies to review for this blogathon, I came across this one and was quite interested in seeing what it was about largely due to the very impressive cast that includes Helen Hunt, Matthew Broderick, Colin Firth and Bette Midler.

The story is presnted in a very fun yet poignant way that works really well in helping to establish everything that they need to.

The cast is superb and that has much to do with the way that each of them is filled with various quirks and personality traits that help make them all feel both unique yet real.

Hunt also directed this movie and she does an amazing job with her directorial debut.

It is so easy to see how much love was put into making this film.

The characters all have various dilemmas and they all seem quite plausible throughout which helps make things more relatable to the viewer because they seem realistic.

The characters all have great chemistry together which helps make things feel even more believable especially given all that they go through along the way.

Midler stands out here as Hunt’s birth mother and the crazy and wild personality of her character helps liven things up even more.

This film does a great job dealing with the various dilemmas of the characters and doesn’t feel the need to force everything to a final conclusion which helps make things even more realistic.

Bottom Line – Really enjoyable and poignant film that works so well. the cast is superb and they all make these characters come to life especially due to their various quirks. Hunt does and amazing job directing this film and it’s easy to see how this was made with so much love.  The dilemmas that these characters all face are quite plausible and realistic and that helps make things feel so genuine and allows for the viewer to feel more connected to everything transpiring.  Hunt has great chemistry with all of her co-stars and makes us believe everything that she goes through. Midler stands out as her birth mother and her crazy and wild personality shines through the entire film. Love the way that the film deals with the various dilemmas of the characters and doesn’t leave everything tied up with a bow because some things in life actually take more time to find the proper closure and conclusion for things. Highly Recommended!

MovieRob’s Favorite Trivia – When Tim Robbins directed his first feature film, Bob Roberts (1992), Helen Hunt appeared in a brief cameo as a television news reporter. When Hunt made her feature directorial debut with this film, Robbins returned the favor and appears briefly as one of the interviewees on the Bette Midler character’s talk show. (From IMDB)