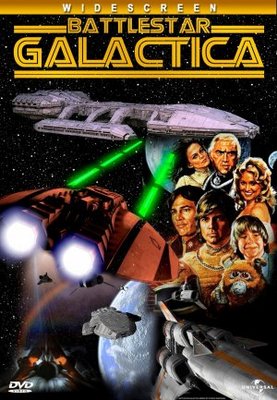 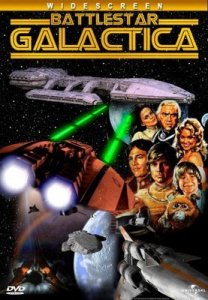 “Ten thousand light years from nowhere, our planets shot to pieces, people starving, and *I’m* gonna get us in trouble? What the matter with you? I tell you… yeah, well, we may as well live for today! We might not have many left!” – Lieutenant Starbuck

Brief Synopsis – While on a mission to sue for peace with their enemies, a spaceship and it’s crew must deal with the aftereffects of the decimation of their world in a surprise attack which leaves them refugees seeking a new homeworld.

My Take on it – This is the pilot move (that also had a theatrical release) for the popular TV series from the late 1970’s.

I recall watching the show with my family during its original run , but didn’t recall much about the pilot episode or the specific of many of the episodes themselves.

The premise of the story is actually quite fascinating but it probably was much easier to digest back when it came out because it’s all done in a very cheesy way by today’s standards.

The film’s special effects seem quite archaic even for its day, but they somehow still make things seem quite plausible.

The acting is very wooden and that is also something that makes it quite difficult to enjoy more.

Since the 2004 version of this show is so much better and more tangible for modern audiences, it’s much harder to enjoy this one because they found a way to make things more interesting and clearer in the re-imagined version of things.

The film (and show) have a great cast and I love seeing Lorne Greene, Richard Hatch and Dirk Benedict in these role despite the obvious limitation of the script and the time that it was made.

Bottom Line – Intriguing idea that probably worked much better when it came out than it does now.  The special effects seem a bit archaic even for its day, but still manage to make things work. The acting is a bit too wooden and that also hurts things. This is an specially difficult series to watch now that we have the re-imagined version of this story from 2004 with makes things much clearer and more tangible to a modern audience. The cats is great with Greene, Hatch and Benedict all doing nice job with these characters despite the limitations of the time and script. Still find it hilarious that they use a monkey in the role of a robotic dog.

MovieRob’s Favorite Trivia – As part of a pre-release agreement with George Lucas, they were not allowed to show laser beams when they use their blasters. All you see is the weapon lighting and then whatever damage was caused. The only time you see a laser or light trail is when they are in space, the Colonial Vipers and Cylon Raiders. (From IMDB)