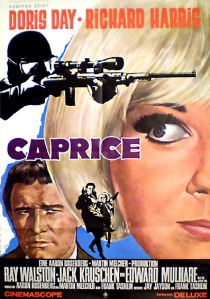 “How is she?” – Christopher White

“With a good night’s sleep she’ll be back to normal.” – Doctor

“She will never be normal.” – Christopher White

Brief Synopsis – A woman who works for a cosmetics company gets involved with international espionage while trying to sell cosmetic secrets to various competitors.

My Take on it – This is a Doris Day film that I’ve been intrigued to see for a while yet never got round to it until now.

This is one of the films that is notoriously known as being among the ones that Day was signed on by her husband without her knowledge.

This film has a really silly plot and the story is a complete and total mess the whole way through.

They try much too hard to make this film feel like a spy film which were extremely popular during the 60’s, but fails to work at all because it is much too crazy because it attempts to be more complex than it really is.

After that, they take the story to even crazier places which causes it all to feel even more convoluted.

Both Day and Richard Harris are amazing actors, yet they fail to have any chemistry together in this film which hurts things even more.

There is no question, that this was a terrible choice for Day’s career and it’s a real shame that she got wrangled into making this movie because it is truly horrendous in all that it tries to do here.

Bottom Line – Complete mess of a story. It tries to hard to seem like a espionage film which were popular in the 60’s, but gets much too complex for its own good.  IT then keeps getting even more convoluted as things move along. Both Day and Harris are superb actors, but they have absolutely no chemistry in this film together. It’s too bad that Day got wrangled into this horrendous film that portrays her in a terrible fashion.

MovieRob’s Favorite Trivia – This film serves as a perfect example of how Doris Day’s husband and manager Martin Melcher mis-handled his wife’s career – in order to make this film (which was a box office bomb) Melcher turned down Mike Nichols’ offer for Day to play one of the pivotal roles of the era, that of Mrs. Robinson in The Graduate. Caprice barely grossed $4 million while The Graduate topped $100 million. (From IMDB)