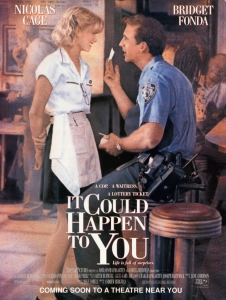 Brief Synopsis – A police officer promises a waitress that he will give her half of his winnings in the lottery in lieu of a tip.

My Take on it – This is a film that I recall hearing about when it came out yet has zero interest in seeing it because it sounded so silly.

I finally got around to watching it about 8 years ago but even after watching it then, nothing really left a lasting impression on me.

The film is actually quite simplistic and that makes it very strange and hard to actually take seriously on any level.

Nicholas Cage once again shows how bad an actor he is with this role and fails to have any chemistry with either of his two leading ladies – Bridget Fonda or Rosie Perez and this also takes so much away from the premise.

The fact that this film is based on a true event is its one saving grace and allows us to realize that such an absurd premise could actually be realistic (since it’s true).

The story unfold in a very weird way and certain twists in the story line help classify this as a romantic comedy despite the fact that it doesn’t have enough believable romance or comedy any way one looks at it.

Bottom Line – Strange film that is a bit too simplistic. Cage is horrendous in this film and doesn’t manage to make us believe his character’s personality at all.  He also has terrible chemistry with both Fonda and Perez which also takes too much away from things. The saving grace of this film is the fact that it’s based on a true story because that actually helps give this story more credibility since otherwise, it would come across as being quite absurd. The story has a wierd twist that classifies it as a rom-com despite it not being convincing enough in all that it attempts to do.

MovieRob’s Favorite Trivia – The movie is based on the true story of Phyllis Penzo and Officer Robert Cunningham. For twenty-four years, Penzo served as a waitress at Sal’s Pizzeria in Yonkers, New York. Cunningham, a thirty-year veteran of the police force in nearby Dobbs Ferry, N.Y., was a regular customer at the restaurant, well-liked by the staff there. (His favorite dish was linguine with clams.) One day in March, 1984, Cunningham asked Penzo for help picking his weekly lottery numbers. Penzo suggested three numbers, and Cunningham came up with three more numbers on his own. Cunningham jokingly promised that if he won, he would split the winnings with Penzo as a tip. The next day, to Penzo’s surprise, Cunningham and his wife came to the diner with the winning lottery ticket in hand. Cunningham’s ticket had won $6 million, which he split with Penzo, giving her $3 million. In real life, however (as stated in a disclaimer at the end of the movie), Cunningham and Penzo were both happily married to other people for many years. (From IMDB)