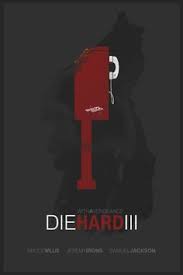 “Life has its little bonuses.” – Simon

Brief Synopsis – John McLane is back and this time must stop a mad terrorist who threatens New York City via Riddles.

My Take on it – Die Hard (1988) is one of my all time favorite films and I love every chance that I get to revisit the characters featured in it.

This is the third movie in the series and despite the fact that it doesn’t reach the same heights as the first two films, they still manage to find a way to continue the story of this character in a fun and thrilling well.

This time, we get to see how John McClane deals with a threat to the city of New York and it’s obviously much different than the ones he needed to deal with in the past which were in a building and an airport.

The script and dialogue is quite witty and they manage to keep things fun while putting the viewer on the edge of their seat as the antagonist makes the characters deal with lots of interesting riddles and tests along the way.

The film relies heavily on the geography of the city and that is a character no less than the people featured because it allows the story to flow really well.

Samuel L. Jackson is great in the role of a Good Samaritan” who tries to help McClane and then gets dragged into the whole proceedings.

His chemistry with Brice Willis is superb and it’s a shame that these actors haven’t found others way to work together over the years besides in an M. Night situation.

Jeremy Irons does a fine job as the bad guy, but fails to reach the same levels in order to stand out as Alan Rickman did in the first film.

This is a movie that fits in quite well within the Die Hard-esque universe and remains the last great film in the series even though the next one is passable.

Bottom Line – Fun continuation of the series that allows the viewer to see how McClane deals with a threat on a city instead of just on a building or at an airport. The dialogue is witty and fun which helps keep things on the edge of the seat throughout. They do a great job using the geography of the city to help keep the story flowing which works really well.  Jackson is great here in his role as a “good Samaritan” who must work together with McClane and their chemistry is amazing throughout.  Irons does a fine job as the antagonist but doesn’t stand out enough as one would hope. Fits in really well within the series and this is the last great film in the series even though the next one is also quite good.  Highly Recommended

MovieRob’s Favorite Trivia – On the DVD commentary, screenwriter Jonathan Hensleigh says the idea for the film’s plot came to him when he imagined what would happen if one of his childhood friends, who was injured after Hensleigh threw a rock at him, decided to seek revenge on him as an adult. (From IMDB)