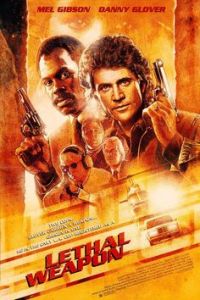 “I guess we need to register you as a Lethal Weapon.” – Roger Murtaugh

Brief Synopsis – Two mismatched homicide detectives are paired up to try and solve the murder of a young girl who was poisoned before jumping out of a high rise window.

My Take on it – This is one of the very best buddy buddy cop movies ever made and it largely has to do with the fact that Mel Gibson and Danny Glover are perfectly cast together here in the lead roles.

The two of them have superb chemistry together and despite the very diverse personalities and methods of these characters, they are able to show how in some cases opposites can truly work so well together especially when they compliment one another along the way.

The film has a great plot that moves along at a great pace and this allows the tension level to stay quite high throughout.

This is mostly due to the way that Gibson’s character’s highly volatile personality both clashes with and in some cases is toned down by Glover’s more down to Earth personality.

The film’s action is presented in a very gritty fashion and that helps keep things so exciting as the story moves along.

This is the best film in the series because it is also the darkest in its theme while also building on the friendship between these characters as they evolve over the course of this film.

The bad guys in this series are never really strong characters and are never developed more than superficially, but in this film, Gary Busey does stand out a bit as the mercenary henchman of the main antagonist.

Bottom Line – Amazing buddy-buddy cop movie that works really well largely due to the performances of Gibson and Glover. The two of them have amazing chemistry together and they allow us to see that in some cases opposites really do attract. The plot moves along really well and they find a way to keep the tension level high due to the highly volatile personality of Gibson’s character which is toned down by Glover’s.  The action is done in a very gritty manner that helps things stay so exciting throughout.  This is by far the best film in the series since it’s the darkest and allows us to see the initial building of the friendship between these characters. Busey is fine as the main bad guy’s henchman, but this is a series where none of the bad guys are developed well enough.  Highly Recommended!

MovieRob’s Favorite Trivia – First movie to show a modern cell phone. It was a Portable Radio Shack Model 17-1003, launched circa 1986 (close to the filming dates of the movie). (From IMDB)