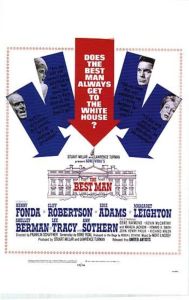 “I don’t understand you.” – Joe Cantwell

“I know you don’t. Because you have no sense of responsibility toward anybody or anything. And that is a tragedy in a man, and it is a disaster in a president.” – William Russell

Brief Synopsis – Two political rivals vie for their party’s nomination and debate whether to use dirt on their opponent in order to get there.

My Take on it – This is an amazing political drama that really thrusts us into the political arena while showing the way that the political system works when trying to decide on a nominees for the Party’s ticket.

The way that they present the story is quite thrilling throughout because of the choices that they make in how they show the plot unravel.

The film has some great dialogue and conversations between the characters which shows that even over nearly 6 decades, not much has really changed in the way that politics work.

The cast is quite extraordinary to watch in these roles and both Henry Fonda and Cliff Robertson are perfectly cast in the lead roles as the two main candidates vying for the nomination.

Lee Tracy tho is outstanding in the role of the former President who is expected to endorse one of them.

His character is great and he easily steals every scene he appears in largely due to the fact that his character has absolutely nothing to lose on this fateful day.

He was quite deserving of his Oscar nomination for Best Supporting Actor for this role.

The film’s script and dialogue is crisp and witty and allows us to slowly find out who each of these men really are as they are developed more and more as things move along.

This is a film version of Gore Vidal’s stage play and they get so much right here in the way it all plays out.

It also shows us the timelessness of such a story and how much of politics and the political system from the 1960’s is still in effect and still very relevant for today’s audience.

Bottom Line – Amazing political drama that stays thrilling throughout due to the way that they present things. The dialogue is superb and allows us to see that unfortunately not much has changed in nearly 60 years in the political arena. The cast is extraordinary with Fonda and Robertson playing the two candidates. Tracy plays the best character tho because he has nothing to worry about during this turbulent day and easily steals every scene he appears in. He was quite deserving of an Oscar nomination for his performance. The dialogue is quick and witty and lets us really see who these men and women are because what they say helps develop their personalities so well for us. Vidal’s stage play and script for this film is great and stands the test of time because this story and everything that is presented to us still remains quite relevant in the way that the political system works. Highly Recommended!

MovieRob’s Favorite Trivia – The later Republican American President Ronald Reagan, who was a Hollywood B-movie actor at the time, was rejected for a role in this film, because a studio executive at United Artists didn’t think he had “that presidential look”. (From IMDB)