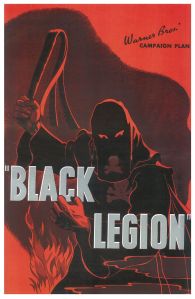 “So, you’re afraid! Maybe they better change the name of your outfit from the Black Legion to the Yellow Legion. ” – Ed Jackson

Brief Synopsis – A hardworking man decides to join a right wing militant organization once he loses his job to a foreign worker and feels threatened by everything ging on in their small town.

Bottom Line – Powerful film that is able to show how simple people could eventually be seduced by harsh right wing organization after they feel threatened by foreign workers. Humphrey Bogart is superb in this film despite the very dark and difficult subject matter and shows how talented an actor he can be because of his character’s range throughout the film.  This is definitely a film that came out before its time especially when one looks at the direction Europe was headed in the years following this movie’s release. The graphic nature of the film is done well especially given the way censors looked at films at the time. Recommended!

MovieRob’s Favorite Trivia – According to the 2007 documentary “The Brothers Warner”, the Ku Klux Klan sued Warner Bros. because of a patent infringement over the use of a symbol in the film: a white cross over a red background in a black square. The case was thrown out. (From IMDB)