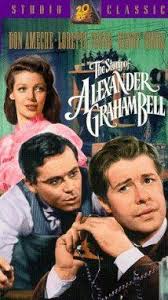 “Your honor… Have I committed some offense by starving in an attic? By spending sleepless nights at my work? By being too poor to own a decent scrap of paper, on which to tell her of my love? I have sat here for days and heard myself called liar, thief, fraud and cheat. I’ve seen my friends humiliated, my invention belittled, just as I have seen my business destroyed by methods which must leave every honest man appalled.” – Alexander Graham Bell

Brief Synopsis – Retelling of the story of how Aexander Graham Bell ended up inventing the telephone with the help of James Watson.

My Take on it – We all take for granted the idea of always being able to communicate with others via our phones an this film tries to tell us the original story of how the telephone was originally invented.

Unfortunately, this is a pretty boring adaptation of the story and it drags along far too much.

Don Ameche and Henry Fonda are both amazing actors, and each are fine here even if the acting overall comes across as seeming quite wooden throughout.

The story itself moves along far too slowly and any attempt to make things more interesting just doesn’t end up working well enough and remains unengaging.

The film has some courtroom scenes which are done well even if some of those scenes feel a bit too heavy handed throughout.

Bottom Line – Pretty boring adaptation of the invention of the telephone. Ameche and Fonda are both fine as Bell and Watson, but things move along in a far too wooden fashion throughout. The story feels as if they are trying too hard to make it more engaging but instead it moves along too slowly. The courtroom scenes are also done well yet come across as being a it too heavy handed along the way.

MovieRob’s Favorite Trivia – After the film was released, the telephone was commonly called the “Ameche”, a slang term referring to actor Don Ameche who played the telephone’s inventor. This association is explained in the film Ball of Fire (1941), showing the term was still in use two years after the release of the original film. (From IMDB)

One thought on “The Story of Alexander Graham Bell (1939)”