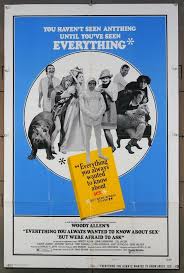 Brief Synopsis – Seven segments that try to answer some of the most burning questions about sex in a humorous way.

My Take on it – This is a movie that I recall seeing over 25 years ago and some of the scenes are so memorable that I still remembered them after all this time.

Woody Allen is able to create such a hilarious movie that works so well due to the way that each of the seven segments play out.

The cast of actors here is amazing and each of the segments feature some very talented and famous actors playing both large and small roles along the way.

They are each able to keep things so fun and enjoyable the entire way through.

Allen himself plays focal characters in some of these stories which is nothing new to people who are already familiar with his work and how integral his own appearance in his film truly is.

His personal charm, charisma and humor helps make hings so much more funny to watch especially when dealing with some very fun and intriguing parts of life.

Not all of the various segments of the film are spectacular but the final one is the one that is probably most cited since it is by far the most memorable of them all.

They manage to hit every mark along the way which make sit so much fun to watch since it’s an intriguing way to tell a story like this.

The fact that this film was made as a direct response by Allen to the author of the original book (see Trivia Section below) is also hilarious because it adds so much to bot the absurdity of this film and the realistic aspect of things.

Bottom Line – Hilarious film that works really well due to the way that Allen plays things out.  The various segments all feature some great and talented actors who help keep things so enjoyable and funny the whole way through.  As with most of his movies, Allen himself remains a focal character throughout and adds his personal charm and humor to some very intriguing and fun aspects of life.  Not all of the segments are perfect, but the final one really hits its mark over and over and makes this such a fun film to watch because of the intriguing way that it depicts the various parts of the story. Love the fact that this was made as a direct response to the book it is named for. (see Trivia section below). Recommended!

MovieRob’s Favorite Trivia – Woody Allen saw Dr. David Reuben promoting his book, on which this movie was based, on The Tonight Show Starring Johnny Carson (1962). When asked by Johnny Carson “Is s*x dirty?”, Reuben replied, “It is if you’re doing it right”, which is a line from Allen’s Take the Money and Run (1969). Allen was offended by Dr. Reuben using his joke, so he made this movie as a form of revenge against him. Dr. Reuben did not like the movie. (From IMDB)