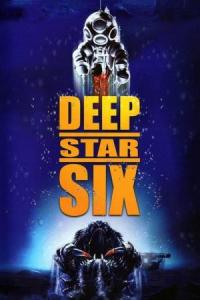 “Well, at least Snyder will get his name in the Guinness book of records. I mean, causing two nuclear explosions in one afternoon has to be some sort of record.” – James ‘Jim’ Richardson

Brief Synopsis – A team of ocean explorers accidentally discover a deadly creature at the bottom of the ocean.

My Take on it – This is a really boring underwater monster movie that came out at the same time that numerous other films of the same genre debuted.

The plot is a bit incoherent here and things come across in a very boring fashion throughout.

This movie feels like a cheap doppelganger of this kind of premise.

None of the characters are developed at all an they mostly all seem like they are there to be cannon-fodder) or fish food if you prefer).

This inevitably cheapens the mood even more and takes away from even caring about any of them.

The plot itself is quite silly and doesn’t work at al if one looks for something plausible or realistic.

They don’t even try to make things sound intellectual and that makes it seem like an even bigger farce.

The special effects are poorly done and the rubber creature they produce doesn’t seem menacing enough because it looks so fake.

Bottom Line – Really boring ocean exploration film that seems like a doppelganger to numerous other films made at the same time. The characters aren’t developed at all and they all seem like canon fodder which cheapens things even more. The plot is quite silly and doesn’t even attempt to be intellectual in any way, shape or form. The special effects used for the creature are quite poor and it looks like it’s pretty fake and only made of rubber.

MovieRob’s Favorite Trivia – Writer Lewis Abernathy sold his script at the same time that friend James Cameron was working on his own “underwater monster saga”. Despite Cameron’s asking that he delay this movie to avoid competing with The Abyss (1989), Abernathy went ahead and was thereby deemed persona non grata with Cameron and associates until they patched together their friendship when Abernathy accompanied Cameron on the September 1995 filming of the wreck of the Titanic for Titanic (1997) (but not any actual dives to the wreck itself). (From IMDB)