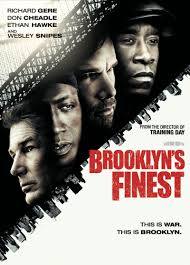 “Giuliani ain’t clean up the city. Video games and television did. That’s what cleaned up the streets. Come on, man, ’cause ya’ll remember when everybody was outside. If you was two years old, if you was a hundred and two, you was outside.” – Gutta

Brief Synopsis – A look at the lives of various members of the NYC police department as they all try and juggle their lives and the way that their world affects all that they choose to do.

My Take on it – This is a movie that I saw when it came out on cable yet didn’t remember anything about it at all.

The film has a great premise that just doesn’t work because of the way that that muddle things up along the way.

The characters aren’t developed well enough at all and there are far too many that share significant screen time.

The cast is spectacular, but since none of the characters are given enough time, they mostly all feel wasted here which is a shame.

The movie lacks some real focus that would help make the audience care more and instead a lot of things get lost along the way.

This unfortunately leaves things getting far too complicated and makes the story less comprehensible than it was at the start.

This is a movie that has a great overall idea but despite it having a nice run time of slightly over 2 hours, it still doesn’t have enough time to develop this long list of characters and their individual story line in a more enjoyable way.

Too much is left feeling unfinished in the way that it all plays out for us.

Bottom Line – Great idea that is muddled by a complex story that tries to weave together too many main characters and stories.  The cast is quite impressive, but since the film doesn’t focus enough on any of them, things get lost in the shuffle.  The film tries too hard to find connections between these various storylines and leave things more complicated and less understandable than they did beforehand.  I liked the overall idea here, but even at a bit over two hours, this film is far too short if they wish to accomplish something with the way this all plays out.

MovieRob’s Favorite Trivia – Antoine Fuqua wasn’t keen on making another cop movie after Training Day (2001) but one read of the screenplay soon convinced him otherwise. (From IMDB)