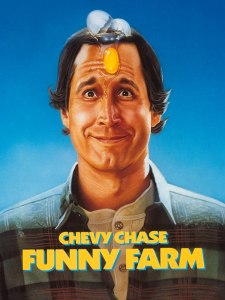 “Remember, Mrs. Farmer. Whenever you buy a house, whatever’s in the ground belongs to you – whether it’s gold or oil… or Claude Musselman.” – Sheriff Ledbetter

Brief Synopsis – A sportswriter and his wife decide to leave the city and move to the country in order to create a more harmonious life for themselves.

My Take on it – This is a movie that I recall seeing a few times on cable as a kid and enjoyed it.

Chevy Chase is a great comedian and has always been able to do both physical and verbal comedy really well.

This film actually works really well due to his performance here.

They are able to take the idea of a quite country life and show what could happen if that serenity was really just a facade and could drive people crazy.

There are lots of really funny moments in this movie that allow it to stay interesting throughout.

The dialogue is great and is filled with many comedic lines but also has a few poignant ones that help add to things.

The characters in the country are so enjoyable to watch because they sometimes act exactly as one would perceive that they should in a calm and serene demeanor while in other moments they act in ways that will constantly surprise.

Bottom Line – Fun film that works largely due to the performance of Chase. The film is able to take the idea of the quiet country life and show how it could possible drive people crazy. The film has lots of funny moments that keep it interesting to watch.  The dialogue is great and is filled with some great jokes along the way that work on numerous levels. The characters in the country area are also fun to watch because sometimes they act how one would expect ‘country folk’ to act while in other situations, they surprise again and again. Recommended!

MovieRob’s Favorite Trivia – According to Wikipedia, “The film was mostly shot in Southeastern Vermont, including the towns of Windsor, Vermont and Townshend, Vermont using locals as extras. The Townshend Common today has an unusual souvenir from the production of Funny Farm: to make the trees on the Common look as if it was mid autumn, the film crew dyed the leaves, which killed all of the trees, except for one in the middle of the Common. Today, the ring of newly-planted trees around the edge of the Common are significantly shorter than the much larger one that survived the filming of Funny Farm (1988)”. (From IMDB)