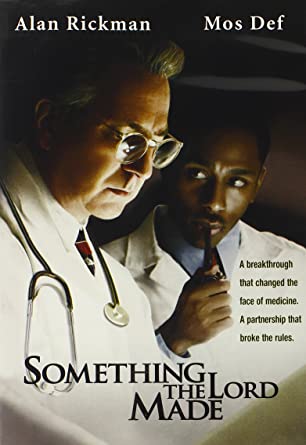 “They say you haven’t lived unless you have a lot to regret. I regret… I have some regrets. But I think we should remember not what we lost, but what we’ve done.” – Alfred Blalack

Brief Synopsis – Based on the true story of the first men who attempted to perform heart surgery which was considered taboo before their scientific breakthrough.

My Take on it – This is a film that I heard about when it came out yet never had the opportunity to see it until now.

They do an amazing job depicting this story in a very poignant way so that we can have a much better understanding of everything that happened.

The characters are developed really well and both Alan Rickman and Mos Def breath so much life into these people that we can see the everything they needed to go through in order ton achieve their goals.

The way that these men were able to work together despite their differences is what helped them take on the challenge of trying to accomplish what was deemed impossible by so many.

This movie does a wonderful job blending together the racial and scientific hurdles that they needed to overcome in order to achieve what they wanted to do.

Their work together helped change the way that people viewed everything that they did.

This film was quite deserving of winning an Emmy for Best Made for TV Movie and it allows us to see the way that things unfold in a very powerful and poignant way throughout.

It also was nominated in the same category at the Golden Globes yet failed to win despite it truly being very powerful the whole way through.

Bottom Line – Amazing depiction of this story that is shown in such a poignant way.  Rickman and Mos Def are both superb in their roles and make us truly believe everything they went through in order to try and achieve what was deemed impossible. The film does a great job mixing together the scientific and racial barriers that they faced along their journey and changed the way people viewed their work due to it.  Was quite deserving of its Emmy win for Best made for TV movie because it allows us to see this story from a very poignanat and powerful perspective. Highly Recommended!

MovieRob’s Favorite Trivia – Based in part on the magazine article “Like Something The Lord Made” by Katie McCabe. It was published in the Washingtonian, and earned McCabe the 1990 National Magazine Feature Writing Award. (From IMDB)