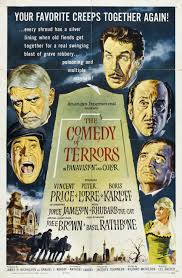 “[giving eulogy for John F. Black] And so, my friends, we find ourselves gathered around the bier of Mrs… er… Mr… You Know Whom… this litter of sorrow, this cairn, this cromlech, this dread dochma, this gart, this mastaba, this sorrowing tope, this unhappy tumulus, this, this… what is the word?… this… er, coffin! Never could think of that word. Requiescat in Pace, Mr… um… Mr… the memory of your good deeds will not perish with your untimely sepulture.” – Amos Hinchley

Brief Synopsis – A down on his luck funeral parlor owner and his assistant turn to murdering potential clients in order to get some business.

My Take on it – This is a film that I had never heard of before coming across it in my research to try and find films to watch for this blogathon.

The premise itself seemed quite clever and hilarious but unfortunately, they never manage to make things work as well as one might hope.

The film’s cast is superb with Vincent Price, Basil Rathbone, Peter Lorre and Boris Karloff all managing to keep things fun despite the story’s obvious flaws.

The film has some great sight gags that work well yet some of them are constantly repeated over the course of the story and it often feel a bit too repetitious in all that it’s trying to do.

The film’s dark humor and dark tone are good yet they never manage to be as effective as one might expect from such a cast like this one.

The runtime of the film is relatively short yet due to the way that certain scenes feel drawn out, there are points where it moves along at too slow a pace for its own good especially in the places where they are just reusing old jokes from a very scenes earlier.

Bottom Line – Hilarious idea that just doesn’t work as well as one might hope. The cast is stellar with Price, Rathbone, Lorre and Karloff doing wonderful jobs here in keeping things so much fun. The sight gags work well even if some of them are repeated over and over. The dark humor of the film is good but still disappoints a bit because one would expect something like this to be much more effective than it truly is here. The film’s run time is short, but still feels as if certain scenes are drawn out too much especially when they reiterate previous jokes.

MovieRob’s Favorite Trivia – Boris Karloff was originally hired to play John F. Black, but it soon became clear that his severe arthritis would not permit him to undertake such a strenuous role. Karloff was switched to the part of Mr. Hinchley, and Basil Rathbone was brought in to play Black.  (From IMDB)